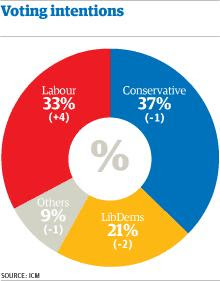 With the prime minister expected to go to the Queen today to ask for the dissolution of parliament (possibly on 12 April, to allow the "wash-up"), the Labour-supporting Guardian publishes a poll which predicts that the Labour Party could end up winning most seats in the general election.

It is strange how supposedly independent pollsters seems to be able to deliver results which support their clients' wishes or expectations, and this Guardian/ICM poll is no exception. It "reveals" a four-point gap between two main parties, with Labour on 33 percent and the Tories on 37. This is the closest in an ICM poll for almost two years.

That, according to The Guardian would give Labour the most seats, but leave it 30 short of an overall majority, reliant on the Lib-Dims, who score 21 percent in this poll.

Skewed or not, it is enough to get The Daily Telegraph's Toby Young chirping about it, while Tory Boy Blog consoles itself with a poll in the Daily Express which gives the Tories a ten point lead. Young wonders whether skewed polls will be a feature of the campaign, with Labour-supporting papers publishing polls that show Labour closing the gap or pulling ahead, while Conservative-supporting papers show an ever-widening gap.

If that does happen, it means that the pollsters have ceased to be observers and are now players, leaving us bereft of any guidance as to the true position – not that we could ever rely too much on what the polls had to say. But, in a taste of things to come, we get Young warbling about the "phoney war" being over and "the most exciting election campaign for at least 13 years" about to begin.

That is the view from the "bubble", but it is not shared by the wider population. Far from "excitement", I suspect that the majority look to the coming weeks with a mixture of dismay, resignation and sullen resentment – those who take any notice of the election at all – as they watch the politicians play their vacuous games.

And that is the real issue – the one that none of the politicians or their respective claques will want to address – that the prevailing mood is a "plague on all your houses". The only good thing about this campaign is that it will be mercifully short. The bad thing is that even the four weeks or so that it will take might seem like an eternity.

For me personally, it will be the first general election since 1992 that I have not been on the streets. In 1997, I was a candidate for the Referendum Party in Derbyshire South, up against Edwina Currie – who mercifully lost her seat. In 2001, I fielded a brace of candidates for UKIP in Bradford, acting as their agent, and in 2005 I was in Shropshire, supporting the local Conservative candidate.

This time, I do not have a dog in the fight, which puts me in the position of an observer, with more interest in who loses than wins. And, as we go into this "exciting" contest, there is only one certainty. With Cameron needing to gain 116 seats to win an overall majority, the biggest required swing since the war, the outcome is anyone's guess. At this stage, it is impossible to call.