A question of responsibility 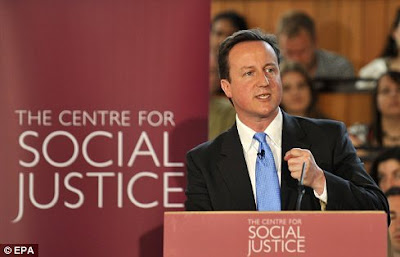 I take a pretty dim view of politicians prattling on about "personal responsibility" and "social responsibility", as did David Cameron this morning, when one of the biggest problems we confront is the increasing inefficiency of the state, combined with the failure of dysfunctional officials to take responsibility for their own cock-ups.

That is not to say that we should not take responsibility for our own actions, individually and collectively – far from the case. But there is a strong element of mote and beam here. Rather than lecture us about our responsibilities, it would be rather more convincing if Mr Cameron devoted his energies to telling us how, as an aspirant leader of Her Majesty's Government, he intended to ensure that government officials took responsibility for their actions.

And, on top of the heap – theoretically – are government ministers. How long is it since we saw one resigning over a cock-up by their offcials? Perhaps Mr Cameron might also care to tell us how he intends to restore the doctrine of ministerial responsibility, and under what circumstances we might expect them to fall on their swords – without the cushion of a handsome payoff and state-funded pension.

In that context, it would help if the man could tear himself away from his "grid" for one moment, and address the issue of the "ash crisis", now that we have learned from the EU commission that the financial losses resulting from the prolonged closure of airspace are estimated at €1.5-2.5 billion – to say nothing of the 100,000 cancelled flights and 10 million passengers stranded.

What is particularly galling here is that there is a strong case to be made that official failures were in the main part responsible for the losses. Yet the EU commission is asking member states to provide airlines with immediate financial relief and has indicated that it will permit limited state aid. Meanwhile, national politicians are silent.

Thus, the officials cock-up and far from this being recognised, those immediately affected have to pay through the nose. Then, indirectly, the rest of us pay via our taxes to remedy the damage. And, all the while, the guilty officials continue to collect their salaries and, in the fullness of time, their generous pensions.

Of course, for Cameron to deal with this issue, he would have to admit that for many of official functions, the UK government bears no direct responsibility, having outsourced its powers to other agencies, not least the EU. This, though, would be far too embarrassing, which is presumably why he finds it so much easier to lecture us about our responsibilities, while ignoring his own.