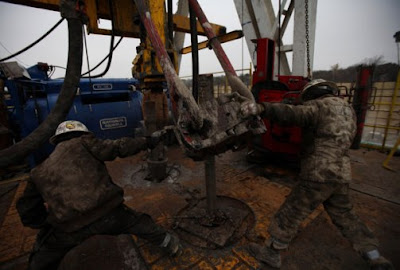 It is utterly bizarre but by no means unusual that an item of huge political significance should be consigned to the business section of a newspaper. Such is the case with as story in The Times telling us: "Dash for Poland's gas could end Russian stranglehold."

This is shale gas again, the influence of which we reported last month, which is not only re-drawing the energy map of the world but re-defining the politics.

The Times tells us that American technology to produce shale gas is unleashing a scramble for drilling rights in Poland, where experts believe vast reserves of unconventional gas exist that could help to weaken Russia's grip on Europe’s energy supplies.

There are technical problems in exploiting this resource, as this recent story makes clear, but despite that ConocoPhillips is poised to launch Poland's first shale gas drilling programme next month near Gdansk on the Baltic coast.

Two other American oil groups — Exxon-Mobil and Marathon — and Talisman Energy, of Canada, are set to follow in what could be the equivalent of the North Sea bonanza, boosting reserves in EU member states by 47 percent - enough to make Poland self-sufficient for the foreseeable future.

Up to press, EU energy policy has been predicated on the supposition that the bulk of gas supplies will come from Russia and her less stable neighbours. This in turn has heavily influenced foreign policy, as well as the attitude towards renewables – the latter a reflection of the need to reduce reliance on imported energy.

As and when local supplies come on-stream, however, and the realisation dawns that the original assumptions on which policy is based are no longer valid, perceptions will change and, in their wake, policies will also have to change.

Before that, though, the balance of power will already have shifted. As each new well in Poland is drilled, Russia's power diminishes – economic and political. No longer will it have quite the same power to hold the Europeans to ransom, threatening to withhold gas supplies.

What is not realised though is that the UK is on the other end of the same geological formation that is providing Poland with its potential bonanza, and there is also the prospect of significant deposits in the North Sea being found. A new source of cheap and reliable energy, to replace dwindling stocks of conventional North Sea gas, could transform the UK's lacklustre economy – and restore our status as a net energy exporter.

Classically though, as the politicians were behind the curve in anticipating the financial crisis – with the Tories still talking about "sharing the proceeds of growth", even as the banks were beginning to crash around them – they seem to be similarly lagging, talking up the need for generations of austerity, just when we might be on the brink of an economic renaissance.

All of this, of course, might come to nothing, although the emergence of unconventional energy sources is having a profound effect on the US, so there is no reason why it should not have a similar effect here. And if it does, it will mean that the political tectonic plates are moving.

But, as always, the politicians – so immersed in weighty affairs of state - will be the last to realise.