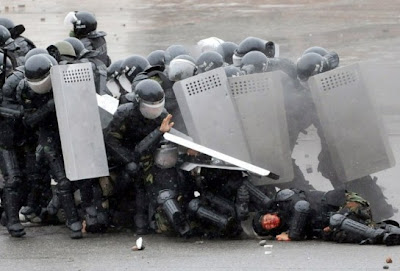 Covered widely by the media, the reports of the rioting in Kyrgyzstan yesterday vary widely in tone and content. But, even if you have to drill down into the piece, not even The Guardian can conceal the reason for the unrest, which has seen protestors beat a Cabinet minister to death.

"The violent rolling protests appeared to be largely spontaneous rather than a premeditated coup," it says, eventually telling us that a "leading expert" has said the government had triggered the protests by imposing punitive increases on tariffs for water and gas. "In the last few months there has been growing anger over this non-political issue," said Paul Quinn-Judge, central Asia project director of the International Crisis Group.

"The government thought they could get away with it," he adds. "Most people agreed. But in the last few weeks we have seen several rumblings in the secondary towns and cities in Kyrgyzstan. There has also been a crisis inside government. Now it has all come together in one giant wreck."

Even the BBC is forced to concede this point but, in fact, the problem has been grumbling for more than "a few weeks". Unrest was reported by Radio Free Europe at the end of February, identifying the protestors as responding to the "electricity price hike".

There is much more to it than that, as The Daily Mail indicates, but even on 23 February the Institute for War & Peace Reporting had Timur Toktonaliev in Bishkek writing: "Soaring energy costs anger Kyrgyz", with prices for electricity having risen 100 percent and the cost of central heating shooting up by 500 percent. Clearly, energy prices have been the primary trigger of current events, something not at all made clear by this compilation of video news clips (courtesy Newsy.com):

And therein is a lesson. For a country with a violent past, not too much can be read into it, but every society has its limits of tolerance and, where we have our own government determined to drive up energy costs, this could become a factor in triggering open dissent in this country as well.

Here, the crucial issue in Kyrgyzstan was that the prices were driven up by government fiat, albeit following a decision to remove subsidies which had enabled energy to be sold at less than the cost of production. It can be assumed, from this, that where government action is directly responsible for price hikes, governments will take the flak.

It is far too extreme to suppose that we will any time soon see a Cabinet minister beaten to death on the streets of London, although there are not a few who would leap at such an opportunity if it was presented. But it is not a happy or a stable government which relies only on constant police protection to keep its members alive and safe.

Ministers, therefore, would do well to note the events in Kyrgyzstan. Even remote possibilities are still possibilities and, the way our politicians are behaving, they could yet become probabilities and then certainties.