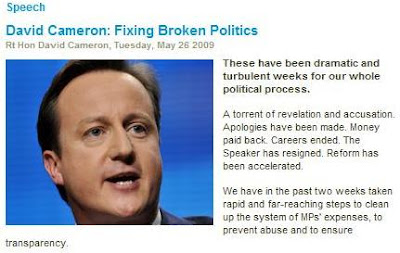 What you will not find in today's Conservative Party manifesto:

But the tragic truth today is that no matter how much we strengthen Parliament or hold government to account, there will still be forces at work in our country that are completely unaccountable to the people of Britain. People and organisations that have huge power and control over our daily lives and yet which no citizen can actually get at.

Almost half of all the regulations affecting our businesses come from the EU. And since the advent of the Human Rights Act, judges are increasingly making our laws.

The EU and the judges - neither of them accountable to British citizens - have taken too much power over issues that are contested aspects of public policy and which should therefore be settled in the realm of democratic politics.

It's no wonder people feel so disillusioned with politics and Parliament when they see so many big decisions that affect their lives being made somewhere else.

So a progressive reform agenda demands that we redistribute power from the EU to Britain and from judges to the people.

And we will introduce a British Bill of Rights to strengthen our liberties, spell out the extent and limit of rights more clearly, and ensure proper democratic accountability over the creation of any new rights.