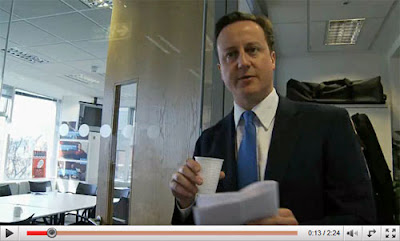 This is it. After all the dithering, this unelected Prime Minister has been forced by the law of the land to call the election he has put off for so long.

There is a huge choice in this election - one that affects the life of every man, woman and child in this country. It's a choice between five more years of Gordon Brown's tired government making things worse. Or change with the Conservatives - who have the energy, leadership and values to get Britain moving again.

We've got an intense few weeks ahead of us. But, as I've just told our fantastic team at Campaign Headquarters, one day we'll all be able to look back on the time we were part of the movement that made 2010 the year of change.

Just take a second to think about it. In the next thirty days, we've got the chance to do what we haven't done for over thirty years. We've got a once in a generation chance to form a fresh government that really can deliver the change we need.

Every leaflet you deliver, every pound you donate, every email you send, every friend you speak to - every extra little thing you do can make the decisive difference between winning and losing.

We can't give Gordon Brown a second chance to ruin the country. So let's get out there and win it for Britain.