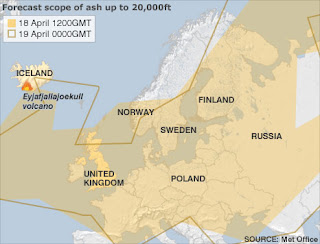 Air travel across much of Europe was paralyzed for a fourth day on Sunday by a huge cloud of volcanic ash, but Dutch and German test flights carried out without apparent damage seem to offer some hope of respite says Reuters.

Dutch airline KLM said overnight inspection of an airliner after a test flight showed no damage to engines or other parts from ash in the atmosphere. Lufthansa also reported problem-free test flights, while Italian and French carriers announced they would be flying empty airliners on Sunday to assess conditions.

KLM, acting on a European Union request, flew a Boeing 737-800 without passengers at the regular altitude of 10 km (6 miles) and up to the 13 km maximum on Saturday. Germany's Lufthansa said it flew 10 empty planes to Frankfurt from Munich at altitudes of up to 8 km.

"We have not found anything unusual and no irregularities, which indicates the atmosphere is clean and safe to fly," said a spokeswoman for KLM, which is part of Air France-KLM. German airline Air Berlin said it had also carried out test flights and expressed irritation at the shutdown of European air space.

"We are amazed that the results of the test flights done by Lufthansa and Air Berlin have not had any bearing on the decision-making of the air safety authorities," Chief Executive Joachim Hunold said. "The closure of the air space happened purely because of the data of a computer simulation at the Vulcanic Ash Advisory Center in London," he told the mass circulation Bild am Sonntag paper.

So, the whole of the shutdown is based on a computer simulation that bears no relation to reality. Does that remind us of anything?