Greece on the skids 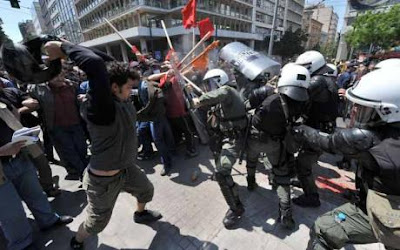 It was not so long ago that I was writing that it had been suggested that when the spread between German and Greek bonds reached 450, we would be at crisis point.

Now, Ambrose Evans-Pritchard is telling us that the spreads on 10-year Greek bonds have exploded to almost 600 basis points over German Bunds. Contagion, he writes, is spreading across Southern Europe and panic trading has pushed borrowing costs close to nine percent. Rates on two-year debt rose to 10.6 percent in "a market gone mad".

The cost of taking out insurance on Greek government bonds through credit default swaps suddenly surged by around a 10th, hitting 620 basis points. That means it now costs over $620,000 a year to insure $10 million of Greek sovereign debt for five years - some $70,000 more than it costs to insure similar debt issued by Ukraine.

The euro also plunged, extending earlier losses to hit a new low for the year against the dollar at $1.3257 and, to cap it all, as the European Union statistics office, Eurostat, raised its estimate of the already huge Greek budget deficit. ratings agency Moody's downgraded Greek debt.

If the British media hadn't gone mad, and could tear itself away from its love affair with the tawdry trio, this would be lead story in all the newspapers, especially when we have Dominique Strauss-Kahn, head of the IMF, saying the situation is "a very serious one." Basically, when the Frogs go in for understatement, we are in deepest doo doo. Or, as Strauss-Khan might have said, "C'est de la merde ce truc".

As a result, it comes as no surprise that Papandreou has gone rushing to the "colleagues" to pick up the dosh promised to him earlier this month.

The only slight problem he has (Brits can still do understatement as well) is that Germany has refused to put in place enabling legislation that will allow Merkel to put her euros in the pot. As with all participants behind the €30bn (£26bn) of eurozone loans, they will need to pass new laws from scratch before handing over any cash.

This, we are told, stretches the timeline into the second half of May before the "colleagues" can deliver, which is going to make it a close-run thing. The Greeks have bonds worth €11.6 billion maturing at the end of that month. They are going to have to rely on the IMF to bail them out.

But the big issue beginning to emerge is the increasing real prospect of "contagion" as Greece's €270 billion in sovereign debt looks more and more shaky. Portugal, Spain and Ireland are on the rack as well and, if there is a hung parliament, according to some pundits, the UK could be taking the heat as well.

Altogether, this is not exactly a happy picture, and we are still in uncharted territory. Not only is Greece in for a bumpy ride, but the euro is under threat, and the whole banking system could take a serious haircut. This, of course, will end up in the little people taking yet another hit. It may just be a good time to lay in a stock of baked beans.

GREEK THREAD
Posted by Richard at 00:00