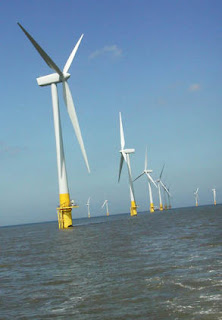 Wind turbines around the UK are sinking into the sea because their foundations are suffering from subsidence, according to Dong Energy, a Danish wind turbine owner – relayed via Yachting News.

A wind farm off Essex and another in Liverpool Bay have been found to have the flaw and checks are to be made of turbines at Blyth, Northumberland and Robin Rigg in the Solway Firth. Up to 336 of the UK's turbines are at risk and will take £50 million to fix.

But hey! What's a mere £50 million between friends, when the bill can just be passed on to electricity consumers? Certainly, not enough to dissuade the Conservatives from reaffirming their commitment to 15 percent renewable energy by 2020, to meet the EU target agreed by Blair.

Interestingly, the Labour Manifesto puts the cost of this extravaganza at about £150 billion. That is roughly the same as our annual public spending deficit, which gives some idea of the scale of the waste involved.

And the only difference between the two parties is that the Tories complain that Labour has failed to come up with the policies to deliver on the targets. There's a difference for which it's worth going to the barricades ... Aux armes, citoyens! The Tories have found a faster way of wasting money.