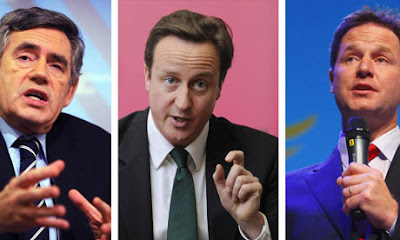 None of the many political pundits who have so often predicted – with such very great confidence – that Brown was going to go to the country on such-and-such a date are now reminding their audiences that they got it wrong. We, however, can enjoy a quiet, self-satisfied (smug, even) smirk, having consistently said that the prime minister would go full term.

So much for these great pundits, these towering figures of modern journalism who are so close to the centre that they know exactly what is going to happen ... yea.

Anyhow, the deed is done. The Westminster parliament, we are told, dissolves on 12 April, with the election on the 6 May. The new parliament resumes on 18 May. Our government (in Brussels) stays the same.

The media, who got it so right about Brown's earlier election intentions, are in their seventh heaven, now that they have the real thing to play with. Clearly, the term "overkill" means nothing to them.

It would be a good time, methinks, to find a deserted island, well away from any broadcast media, failing which, there is always the "off" button on the TV – ditto the radio. I, for one, am going to rely almost entirely on the internet for election coverage. That is the only way to retain some semblance of control over the input.

That said, I'm opening up a forum thread for the duration (see below), and will keep it running until the election result is declared.