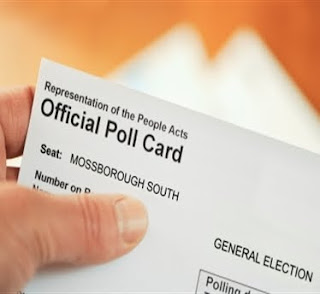 For all the hype, and it would have been difficult for the media to have invested much more energy into promoting the event, it would appear that audience figures were down, compared with the first debate – an average of 7.4 million viewers as against 9.4 million.

These figures, as indicated, are averages. What we never get to know is how many people watched the whole debates, start to finish. I have to admit that I was one of those wathcing last night's, although halfway through I also had a card game up on the laptop, to relieve the boredom.

If declining viewing figures equate to lack of general interest in the Cleggerown show, The Independent reports on what may be a conflicting signal.

The paper has "discovered" that there has been an "unprecedented" surge in the number of people registering to vote in next Thursday's election. From the south coast of England to central Scotland, local authorities are reporting increases of up to 17 percent, with a consistent trend across major cities, suburban constituencies and rural seats. The surge is apparently at its most pronounced in areas with crucial marginal seats.

The London Borough of Islington said 135,769 people had registered to vote on 6 May, compared with 116,176 at the time of the last election in 2005, a rise of 17 percent. In neighbouring Hackney, registrations have gone up 15 percent.

The number of voters on the electoral roll has increased by 8 percent in Leeds, equivalent to an extra 18,000 voters. It also went up by 6 percent in Newcastle and by 4 per cent in both Sheffield and Manchester. A call centre set up by Manchester City Council received more than 1,000 calls a day after the first leaders' debate on 15 April. The authority reported an "unprecedented" 7,000 people registering to vote during this month.

Returning officers, we are told, attribute the "remarkable" increase to the interest generated by the three televised leaders' debate and the three-horse nature of the contest. That may or may not be the case, but does not fit with the declining viewing figures. But it is an intriguing nugget of information, which is possibly at odds with indications of increasing voter apathy.

This further adds to the ambiguous signals that make this election impossible to call, even if the media luvvies think that Cameron "winning" the debate last night gives him the keys to Number 10. If that is the case, it is not reflected in the latest YouGov poll which has the Tories on 34 percent (no change), the Lib-Dims on 28 (down three) and Labour on 27 (no change). The "Others", incidentally, are up three on 11 percent.

There remains the possibility of a last-minute surge for the Tories, even right up to polling day, but then, to borrow from Star Trek, one could say: "prediction is futile".