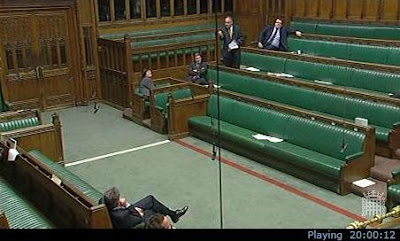 MPs have been criticised for not showing up to the Digital Economy Bill debate during its second reading at the House of Commons yesterday.

So says The Daily Telegraph, which complains that, although the controversial Bill was voted through its second Parliamentary reading, only 40 MPs (approximately five per cent of the total 646 members) showed up to listen to the debate which preceded the vote.

Horror of horrors, at one point during the evening debate, fewer than 15 members were sitting in the chamber, despite over 20,000 voters having written to MPs to lobby against the Bill going through without a proper debate.

Such behaviour, though, is entirely normal. Many times we have remarked upon the sparse attendance, particularly with defence debates, but this cuts right across the board. Except for PMQs and the occasional showcase debate, few MPs bother to turn up. They have become political dilettantes.

This, however, is not entirely the MPs' fault. When they do bother to contribute to a debate, they rarely get any recognition for their efforts, as the media have largely ceased taking an interest in the formal proceedings of the House. There is, though, an element of circularity – the media doesn't bother because the MPs don't, and vice versa.

And yesterday, with the torrent of coverage about the general election announcement, it was hardly likely that MPs would bother with a trivial thing like debating a major piece of legislation. They have an election to fight, and that is far more important.

That, in fact, is the lesson from this little episode. Westminster politics has largely become about elections – who gets in and who gets thrown out. The status of Westminister as a legislature has dwindled almost to nothing. But the MPs are playing with fire.

If they have so little regard for the laws that are passed in their name, why on earth do they think that we should treat them with any greater respect?