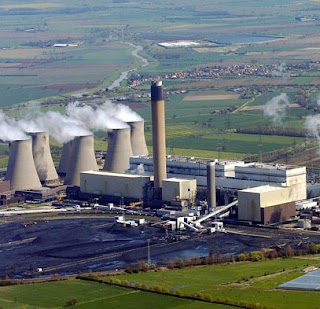 As if the Large Combustion Plant Directive isn't doing enough damage, the "colleagues" are now working on a revision
to the infamous directive on integrated pollution prevention and control (IPPC), which they are now calling the Industrial Emissions Directive.

The directive applies to virtually all production processes, including electricity generation plants, the revision taking the "opportunity" to ramp up the emission requirements.

Originally set to apply to existing plants from 2023, it now appears that the luvvies in the EU parliament are pushing to have them included by 2016, which means that up to 14 power plants could close, putting energy security at risk.

The CBI has woken up to the danger and has put out a warning, prior to the parliament vote on 4 May ... two days before our general election, when no one will be taking a blind bit of notice.

The CBI is calling for power plants to be given until 2021 to prepare for the proposed changes which, it says, "will allow other low-carbon forms of energy to be built to replace the lost capacity and ensure a smooth transition."

I have no means of knowing which way the EU parliament will vote, but even if the original text is approved, it is still bad news for us all, as it will significantly add to costs – not that you would glean this from the fawning CBI press release.

The EU parliament voted this through the first reading on 10 March which means that it is up for its second reading on 4 May. If the amendment is then endorsed, the measure goes for conciliation, where the Council of Ministers – which has agreed the 2023 transition period – will have to give ground or the measure will fall (and is thus likely to give ground).

The best bet, therefore, is for this to be stopped on 4 May, but with attention elsewhere – not least on the deteriorating Greek situation - sod's law could apply and the thing might slip though without any real drama.

If that happens, there is a good chance that the lights will go out on or around 2016. That will be the parliament after next in the UK. Whoever is then prime minister of our provincial government will have the dubious pleasure of explaining to us all how lucky we are to be in Europe but not ruled by Europe. If there was any justice, it would be that idiot Cameron, forced to eat his words, but he may be political history by then.