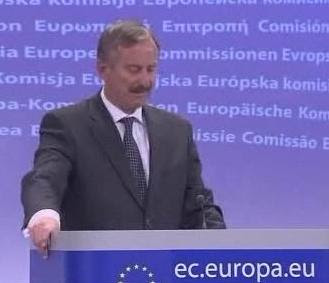 The cracks have started to show in the official edifice, with a senior EU commission apparatichik declaring that the flight restrictions in response to the Icelandic volcano were "excessive".

Thus, Bruno Waterfield told us, Matthias Ruete, the commission's director general of transport, thought that the no-fly zone should be restricted to "several dozen kilometres" around Iceland, and the Met Office science should be re-evaluated.

"The science behind the model we are running at the moment is based on certain assumptions where we do not have clear scientific evidence," said Ruete. "We don't even know what density the cloud should be in order to affect jet engines. We have a model that runs on mathematical projections. It is probability rather than actual things happening."

We also learn from Mr Ruete that the commission was "forced" yesterday to intervene with national authorities to "unblock the mess" and to allow airlines to fly test flights to check the Met Office data.

"In a case where, we do not have the data it is a tremendous and terrible responsibility for the authorities to say, 'oh well go on up'. That is why test flights are so important to have some kind of empirical evidence to help us move on from the mathematical model," he said.

However, as Bruno notes, the very fact that the flight restrictions exist is because of the European system, where national and European authorities are compelled to act on Met Office's advice, even if it is limited to mathematical modelling. This is the effect of the EU's Single European Sky which turns ICAO "guidelines" into mandatory requirements, through a multilateral agreement on co-operation of air traffic management.

The problems arises through the guidelines which, during a volcano eruption, effectively turn "the forecast furthest extent of the ash cloud" into the exclusion zone, without reference to particle density or character.

By this means, we end up with a technician in the Met Office running a computer model, the output of which closes down UK civil aviation and much of Europe. But the system exists only because the EU has agreed it, and imposes it on the national operators – with the agreement of their national governments.

Faced with the consequences of this, though, the commission is now telling us, rather late in the day, that it will "support" an option restricting the flight ban to the immediate vicinity of Iceland. With that, we get the news that EU Transport Commissioner Siim Kallas (pictured) will allow the UK progressively to remove no-fly restrictions from tomorrow morning, allowing air traffic to resume.

This also allows the EU quietly to slide out of its responsibility for the shambles and, with the focus firmly on the national authorities, the media allows the "elephant in the room" to slumber on undisturbed.

All that is then left is for the British government to make the "meaningless gesture" of calling in the Royal Navy to help clear the backlog, while the political parties compete to gain such advantage as they can from the misery suffered by so many people.