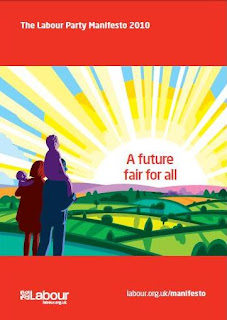 "This General Election is fought as our troops are bravely fighting to defend the safety of the British people and the security of the world in Afghanistan," writes Gordon Brown in his introduction to the Labour Party manifesto, published today. "They bring great pride and credit to our country," he adds. "We honour and will always support them."

I guess that could be taken as an answer to James Kirkup, who writes in his blog of the general election: "no one is talking about Afghanistan or defence".

And he has not been the only one to raise this lament. Last week, Richard Norton-Taylor in The Guardian was making the same point, noting that: "The ongoing war has so far scarcely received a mention in the election campaign, despite its enormous cost and unpopularity."

But, there again, while Brown raises the issue in the first sentence of his introduction – and the war is given a moderately lengthy treatment in the manifesto itself, no one (meaning the politicians) is actually talking about Afghanistan – and nor is it being raised by the media when they question candidates.

Kirkup offers a number of reasons for the silence, the main one being that, at base, there is a consensus between the Conservatives and Labour over the overall strategy. This could be said to be a good thing, observes Kirkup. After all, do we really want political point-scoring over military deployments? It rarely makes for sensible policy.

On the other hand, he suggests that consensus can be stifling, then writing: "Surely our strategy should at least be debated? Assuming that the current approach is the best and only approach strikes me as worryingly complacent."

And indeed our strategy should be debated, but it is unlikely to be. The Labour ideas for dealing with the insurgency are desperately limited and it was only recently that I wrote a post on setting out the reasons, why the military expeditions in that benighted country must fail.

More recently, from a slightly different perspective, there was a post from Armchair Generalist, who came to the same conclusion.

The post is well worth a read, specifically because it highlights the enormous capacity for self-delusion which prevails in military (although by no means confined to it) – allowing small military successes to be highlighted, while the corrupt Karzai government poisons the well.

The account is almost in the same league as the old joke, "apart from that Mrs Lincoln, how did you enjoy the play?" Never mind that the fabric of the nation is falling apart, the military is handing out beads and blankets to the natives to make them feel good.

But you get a taste of why the politicians cannot handle the debate, from the coverage in the MSM, where there is anything but a coherent picture. For instance, recently in The Times we say a piece that demonstrates – amongst other things – why we will not miss it when it retreats behind its pay wall.

Headed, "UK troops suffer in Sangin, the most dangerous place in Afghanistan," it makes a statement of the blindingly obvious to anyone who has being paying the slightest attention to the campaign in Afghanistan.

The lethality of Sangin is a subject we have explored at length over on DOTR, not least in this post in which I examined the role of town planning and engineering in warfare.

But such subtleties are quite beyond The Times. Its only real contribution was to quote military propaganda from Major-General Gordon Messenger, the UK spokesman for operations in Afghanistan. The piece had him insisting that progress was being made in the area – which, manifestly, it is not.

"No one is denying that Sangin is a dangerous place and a challenging district in which to make progress," he said, conceding the undeniable. "But we categorically retain the initiative in the contest against the Taleban in the area," he added, going on to tell us that ISAF forces are "frequently striking against insurgent networks and individuals with considerable success."

This is much the same message we have been hearing from the military ever since they arrived in Afghanistan, and we recall the brave, optimistic words on the recapture of Musa Qala, only to learn that British forces handed over the town to US forces at the end of April, having failed to subdue the region.

But what we have not heard is anything about the bigger picture – the proxy war between India and Pakistan and the role of geopolitics in perpetuating the conflict. Instead, the discussion is claustrophobically confined to the narrow military aspects, with only a nod to Afghan politics and the situation in Pakistan.

That there is "consensus" about strategy, therefore, would suggest that all the political parties share the incompetence or lack of foresight of the Labour government, which has us trapped in a conflict we cannot win, at an expense which will exceed £5 billion over the next year.

Tomorrow, we will get a chance to see if the consensus survives, when the Conservatives publish their manifesto – or whether they have anything unique or interesting to say about the conflict. Somehow, though, we are not inclined to hold our breath.