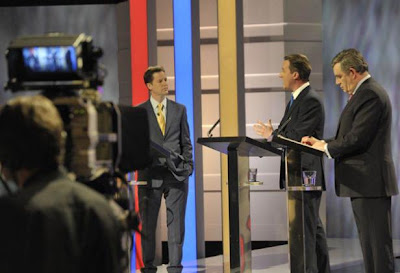 In yet another example of why we will not miss The Times when it retreats behind its pay wall, we have today David Aaronovitch, writing the most incredible tosh about the "great debates".

His piece is headed: "Last night we saw the new masters in action ... and they turned out to be us." The TV debate, he asserts, "marked another step in power shifting from the rulers to the ruled."

The staging of the debates, he gravely informs us, tells us something that runs completely contrary to conventional wisdom. It tells us that power has moved by one large new increment from the rulers to the ruled, a process that has been going on this country — and other democracies — for decades.

Even as he wrote these words, however, he tells us he could "feel as much as hear the snorts" from those who have convinced themselves that Britain is a society in which "they" have increasingly taken powers from "us".

So follows a lengthy dissertation about how much more "transparent" are leadership elections and candidate selection, culminating in a further assertion that this has eroded the unchallenged power of senior politicians, who used to make the decision. This is the great untold story of our times.

It goes without saying, of course, that such a trite analysis can only survive if the elephant in the room is robustly ignored. Factor in the EU, however, and the thesis falls apart. We have essentially powerless MPs, now put through the hoops in a grotesque beauty contest, all to acquire the trapping of power, while the real power has gone elsewhere.

The worst of it is that people like Aaronovitch cannot even begin to see that the public aversion to politicians stems as much from an appreciation that they have become irrelevant, that parliament has lost its authority and that we have empty vessels vying for office, for the sake of office but not with any expectation that they have the power to make changes.

This then is "bubblespeak" writ large. We are on the verge of a revolution in politics, and the "great" political commentators of our time are totally blind to what is going on around them.