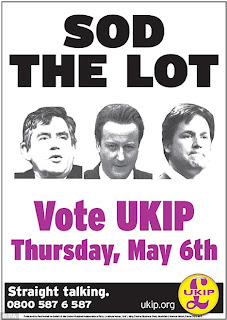 It must be terribly frustrating for the political élites and their claqueurs that the great unwashed won't roll over and do as they are told. But, as long as we have the likes of Gerald Warner to bring them down to earth, they are not going to get their way.

Of the "great debate", the occasion, says Warner, "was a revolting exhibition of the consensual, issue-evading tripartite conspiracy that passes for politics in Britain now." He thus concludes that, "none of the above" is the only response that any Briton could, while preserving a modicum of self-respect, give to the detestable trio we saw capering on our television screens.

Thus we have a clear split – not between the parties but between those who still take politicians seriously (the minority) and the rest of us, who think they are a bunch of wastrels. If anything, yesterday saw the divide strengthen and the "sod the lot" tendency gain a few more recruits.