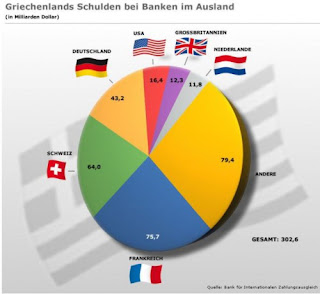 The Eurozone is on its deathbed, writes Gerald Warner, articulating that which many have predicted, even if the collapse has been a long time coming.

Ambrose is equally pessimistic, but then he always is - although the OECD secretary general is now comparing the crisis to the Ebola virus. Clearly, virology is not his strong suit.

Moi, I'm a little more cautious. Having myself predicted the demise of the single currency, only to see it rise again from the dead, one really does wonder what it will take to kill off this zombie.

However, it is marginally entertaining to see that the country which is squawking loudest about the Germans needing to do something is France ... which happens to have the largest national exposure to Greek debt.

If it is the Franco-German motor which has kept the "project" together, it will be hugely ironic if stresses over Greek debt tear the partners asunder.

GREEK THREAD
Posted by Richard at 17:21