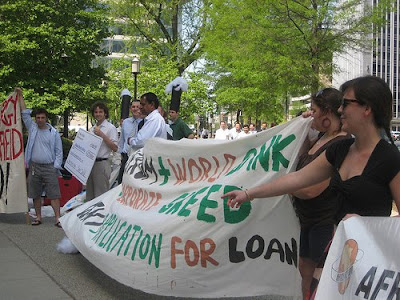 The World Bank has approved the $3.75 billion loan for Eskom's 4.8GW coal-fired electricity plant in South Africa, despite the abstentions of British, US and the Dutch representatives.

Some 125 environmental groups had written to the World Bank demanding rejection of the loan. Local groups also put the British government on the spot, challenging the Labour government on its "green" credentials, calling for it to vote against the loan.

When the decision was announced, there was no immediate word on how the UK did actually vote, but a later report stated that the UK abstained. Offering a bland statement, an official spokesman for DFID said, by way of explanation: "The project raises several sensitive and potentially controversial issues which it has not been possible to resolve before this period began."

The US Treasury said it abstained due to "concerns about the climate impact of the project and its incompatibility with the World Bank's commitment to be a leader in climate change mitigation and adaptation."

A Dutch Foreign Ministry spokesman said it had advised its representative to abstain, citing concerns that Eskom was not doing enough to develop alternatives to coal. "The Netherlands believes Eskom is doing relatively too little to develop alternatives to coal, so we don't think this is a good proposal," a ministry spokesman said.

There is some early reaction but we will wait to see how the greenies react en masse – they are going to hate it, not least because this will be one of the biggest coal-fired plants in the world.

Costing about £11 billion for the complete development, the first of the 800 MW units (of six) is scheduled to be on-line for the first quarter of 2012. When fully operational, in 2015, it will be burning 14.6 million tons of coal per year, with an expected life of 40-50 years. And the South Africans have ruled out any prospect of carbon capture.

You can see why the greenies are so upset. The plant will add potentially 1.5 billion tons of carbon dioxide to the atmosphere over term - about three times the total UK annual emissions from power stations, motor vehicles and homes. It effectively makes a nonsense of our attempts to cut our emissions, especially when India is planning six of these units, dwarfing any UK reductions.

Strangely, although The Guardian covered the loan issue on 1 April, and The Times on Tuesday, UK media response has been sluggish.

The Times was first into the fray, remarking that Britain effectively had the casting vote on the loan because of the US abstention, following with a reaction from Ruth Davis, chief policy adviser for Greenpeace.

Davis is saying: "Britain could have stopped the loan if it had wanted to but it took the easy way out. Abstaining at this late stage is effectively allowing it to go ahead. The plant will be a major source of greenhouse gas emissions, paid for partly with aid money intended for the world's poor." She added: "Hopefully Britain's abstention means this will be the last plant of this kind subsidised by the UK taxpayer."

The Guardian skirts the UK dimension, instead remarking that the vote had been widely seen as a test of the Obama administration's commitment to new guidelines put forward barely three months ago, shifting aid to the developing world away from coal and fossil fuels to less polluting energy sources.

This paper also cites environmental groups, notably Karen Ornstein of Friends of the Earth, and again the focus is on the US. Says Ornstein: "I am not going to give them points for abstaining. This was totally the easy way out ... If the US were to follow its own clean coal guidance for multilateral development banks it would have had to vote no on this loan." Michael Stulman of Africa Action adds that the entire project was misguided, and would do little to help poor South Africans.

The Financial Times has environmental campaigners claiming that they were given inadequate time to respond to the proposal, saying they "will not let the matter rest". Earthlife Africa and GroundWork, two South African campaign groups, have already complained to the bank's inspection panel asserting that its rules are being broken.

These two groups issued their own press release, calling the decision a "governance disaster", declaring:

This is an assault on the livelihoods and way of life of global citizenry. Instead of using its financial resources to help developing economies leapfrog from carbon intensive development and promoting investment in clean and ultimately cheaper alternatives, such as wind and solar, the World Bank is propagating "business as usual". This is akin to fighting a fire with petrol.

On might, on that basis, expect the BBC to come in strongly, but its coverage is muted.

On the other hand, South Africa's Business Day comes to the defence of the Bank (sort of), citing its spokesman saying that the loan was brought about by "unique circumstances" including South Africa's energy crisis of 2007 and early 2008, and the global financial crisis that exposed the country's vulnerability to an energy shock and severe economic consequences.

That is as maybe, but there are other loan applications in the offing, specifically from India. It is going to be interesting to see how the Bank deals with these if it is looking for "unique circumstances" as the justification for granting approvals.

He adds that when energy access depends upon cheap energy, arguments to increase energy costs or deny energy access are not going to be very compelling. The South African coal plant decision well illustrates many of the political boundary conditions that shape climate policy. Policy design will have to accommodate these conditions, rather than ignore them or think that they will somehow go away.

That succinct summary draws the battle lines - development or greenery, but not both. Even if the likes of the UK are prepared to wreck its economy in pursuit of green obsessions, developing countries are not prepared to follow. And, so far, the NGOs have not been able to prevail. But, the battle will doubtless continue.