The plague party wins it 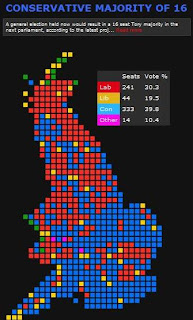 Politics Home is running its own analysis of the election and is currently predicting an overall majority of 16 for Cameron (pictured).

The methodology, however, looks unconvincing but, more to the point, gut instinct says the prediction is wrong. What looks closer to reality is the latest Populus poll for The Times, which puts Labour on 33 and the Tories on 36 percent, narrowing the Tory lead to three points. The Lib-Dims are on 21 percent, so Labour would be the largest single party, with about 300 MPs, ahead of the Tories on 264 and the Lib-Dims on 54.

The paper headlines this as the general election "race" tightening, but that is probably to miscast it. People are walking away in their droves, reacting against the saturation coverage and the sight of a political class that seems to have learned no lessons, and has failed to realise quite how much they are loathed.

Thus, the subsidiary "take" of The Times is probably as real as it gets. The poll, it says, reveals deep public disenchantment with the campaign so far, with more voters now hoping for a hung parliament than either a Tory or a Labour outright victory. Some 32 percent of the public are in that camp, compared with against 28 percent wanting a Tory majority and 22 percent a victory for Labour.

There is talk of Labour enjoying a manifesto "bounce" and hence the Tory position is expected to recover in the next poll, when their manifesto launch registers with the public. But, while some Tory commentators are gushing over the little purple book, my hunch is that any bounce will be short-lived.

This manifesto, on reflection, is possibly the biggest political mistake Cameron has ever made. Too clever by half, it lacks in credibility and ignores the "elephant in the room" of the EU. And if people don't buy into it wholesale, they will most likely take the view that The Boy is trying to pull a fast one. There will be nothing in the middle.

Still the game is for playing, but that gut feeling says The Boy has blown it. A serious manifesto spelling out the problems and the remedies needed could have been a game-changer, but this thing is too vague and too gimmicky to do otherwise than suggest Cameron is playing games.