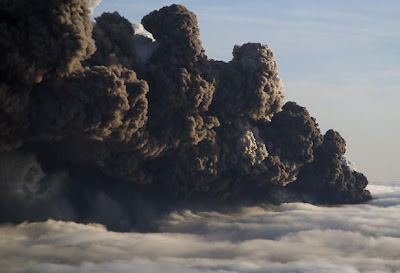 According to Reuters, all civil air traffic in UK controlled airspace has been suspended, with effect from midday until at least 6 pm and possibly longer.

This is a consequence of resumed eruptions of a volcano under the Eyjafjallajokull glacier in Iceland. But you would think the very least the Icelanders could do, in part recompense for all the trouble they are causing us, is rename the glacier to something more pronounceable.

There is no official word yet as to whether the CO2 emissions from the volcano will count towards the national quota, although the probability is that the dust produced will have a cooling effect which could – if it goes on long enough – have massive repercussions.

In 1783, the Laki volcano in Iceland began a series of eruptions which resulted in famine as far away as Egypt, when crops failed due to disruption of climatic patterns. The winter of 1784 was also the longest and coldest on record in North America.

An earlier eruption, in 1695, saw widespread famine in Scotland, as dust in the atmosphere dimmed the sunlight and caused crops to fail. Now, the greater risk is that the current eruption will trigger the nearby Katla volcano, with unpredictable but dire effects.

Equally possible, there will be no significant long-term effects at all, as was the case when the Grimsvotn volcano erupted in 2004. But no one knows for certain what the outcome this time will be, other than to remind us that, mighty though we might be, we are but tiny creatures in the face of the power of natural forces.

UPDATE: NATS has announced that no non-emergency flights will be allowed in or out of the UK until 6am tomorrow (7am BST) at the earliest. Irish and Norwegian airspace is also is closed, as is the northern sector over Finland. Belgian airspace will be closed from 3.30pm, Denmark's by 5pm, and Sweden's by 9pm. There are also closures over the Netherlands and the airspace there will be fully closed by 1900 hrs.