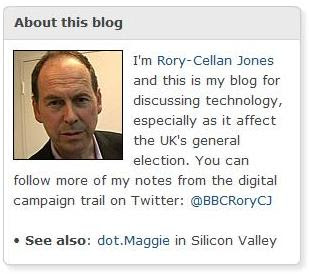 A rainy, cold Bank Holiday has a dynamic of its own. You don't really feel like getting stuck into anything serious, and there is not a great deal happening which leaves a sort of vacuum. There is also a sense of phoney war, the last break before the general election campaign starts, when we will have wall-to-wall politics until 6 May.

Thus wholly unmotivated, one scans idly the blogosphere, coming across a post on Witterings from Witney which in turn refers to a post by the great BBC sage Rory-Cellan Jones. He is asking, rhetorically of course because he's already made up his mind: "Does the blogosphere matter?" Jones has decided it doesn't.

He is, as one might imagine, referring to political blogs and names the "usual suspects". But what caught my eye was his comment, noting of the "more prominent bloggers" that "it's a while now since any them has produced a real scoop."

Not wishing to be accused of false modesty - to add to my many other sins – I would tend to regard myself as a "prominent blogger". And, as regards scoops, I think I can point to my December story on Tata Steel and its surplus carbon credits, the outing of Rajendra Pachauri, "Amazongate", "Africagate" and the WWF and REDD as qualifying.

But EU Referendum is not on Rory-Cellan Jones's radar because, in his tiny little, self-referential world, we are not a political blog, and most certainly not part of the claque.

To the likes of Rory-Cellan Jones, "climate change" is a peripheral issue, of only marginal importance. He would, for instance, never dream of visiting Watts up with that? Energy, and a host of other vital issues, does not even factor in his mental checklist. "Europe" – as he would term it – is something only "fruitcakes" discuss. He is into real politics.

And that explains why so-called political commentators get it wrong so often and why they will continue to get it wrong. Having so narrowly defined politics, and then retreated to their little bubble, they really do not have the first idea of what is going on in the real world.

But as to the question, "Does the blogosphere matter?" – I don't think anyone knows the answer. But if I didn't personally think it did, I wouldn't invest so much time and energy in it. My guess is that it is a lot more influential than Rory-Cellan Jones thinks, but in ways that he cannot even begin to imagine.

But then, what do I know? I'm only a blogger.