An epitaph for Greece? 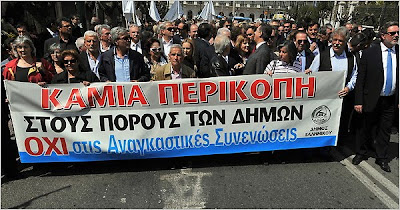 Unwittingly, The Financial Times may have delivered the ultimate epitaph for the foolhardy experiment of allowing Greece into the eurozone.

It comes in its latest analytical offering – of which there has been no shortage – when we are told of the latest developments, with the rider: "This was not how things were supposed to work out." That, most certainly would suffice for the gravestone of a nation.

The situation on which the FT was commenting was the declaration by somebody or other in the EU telling everybody who would listen that the "colleagues" would come dashing to the rescue if need be. Greece would not be allowed to default.

Somehow, though, this message does not seem to have got through to the markets. Nervousness about Athens' public finances, we are told, has contaminated lending in the private sector, with depositors having withdrawn €10 billion from Greek banks.

This is what the FT thinks should not be happening. Greece cannot be forced out of the euro and is unlikely to leave voluntarily so, with the declaration of support, the markets are supposed to rush in and buy up Greek debt.

The reason for this seems to be that the EU – with Germany looming in the foreground – is playing an elaborate game of chicken. It framed its statement of support, says the FT, in terms of a reason why the support would never actually be needed.

Worrying, however, is just what the market seems to be doing – manifest in the yields on two-year debt and the cost of credit default swaps, although precisely where they stand is not exactly clear ... different reports seem to be reporting different figures – rather like the Greek government's accounts.

Strangely, even though it is not going to fail, the European debt markets are still behaving as if the impossible could happen – which, of course, it can't. But since the debt brokers this side of the pond aren't playing ball, Greece is trying to offload debt on the US market, where it is assumed that there are gullible buyers around who are prepared to take a punt.

Unfortunately – for Greece – US investors seem no longer to be relying for their market intelligence on surface mail delivered by the fortnightly steam liner. Thus, the WSJ tells us, they aren't playing ball either. Neither are the Chinese and Japanese investors particularly interested, especially as there are safer options around ... like Russian bonds. It really is that bad.

As a result, the credit rating agency Standard & Poor is marking Greek debt down as BBB+, with a negative outlook. No one knows for sure if there is a ZZZ- category, but it could be that we are about to find out.

Nevertheless, all is not lost. The Guardian is telling us that Greece cannot be allowed to fail. The union cannot afford another failure like that of the now defunct Lisbon agenda, it says. So the member states must step in and do something. Somebody, anybody, must do something. So there ... sorted.

That leaves the New York Times to note that the question facing Europe is no longer whether Athens has the political will to cut spending and raise taxes to curb its gaping budget deficit, but whether Greece will run out of money before it gets the chance to do so.

The money, so to speak, is on Greece running out of money. "This is no longer about liquidity; it's a solvency issue," says Stephen Jen, a former economist at the IMF who is now a strategist at BlueGold Capital Management in London.

But, since German and French banks own over €100 billion in Greek bonds, it is unlikely that Greece will be allowed to fail. Here we go again. According to Yannis Stournaras, an economist and an adviser to previous Socialist governments, all Greece has to do is ask for the money.