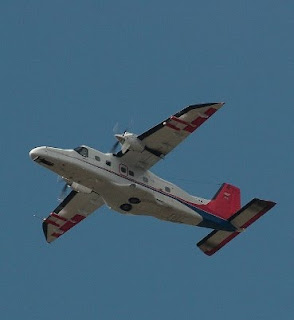 Although on forums and in comments sections, the "better safe than sorry" brigade still has a voice, the full extent of the over-reaction on the volcano ash debacle is now becoming apparent.

From The Daily Telegraph (as a separate story in the print edition), today's Daily Mail and the Mirror, we learn that Jim McKenna, the CAA's head of airworthiness has admitted that the plume of ash during the recent shutdown had often been "close to undetectable".

Prof Stephen Mobbs, director of the National Centre for Atmospheric Science, who was responsible for carrying out test flights, says that the highest levels detected above Britain were around 300 micrograms in "patches". But, said McKenna, "It's obvious that at the start of this crisis there was a lack of definitive data".

All the reports mention the absence of the BAe-146 in the early stages, as did The Sunday Times yesterday, and it is by now evident that the lack of aviation assets to carry out physical sampling contributed significantly to the length and extent of the shut-down.

That said, with the help of readers, I have pretty much sorted the confusion over the Dornier 228 flights. It now seems pretty clear that it did fly on the evening of the 15 April, and again on the 16th, when it may have been in Scotland.

On the Friday evening, it was in Cranfield in Bedfordshire, through Saturday, being fitted with advanced Laser measuring equipment (LIDAR), but it is not clear (in my mind at least) whether if flew operationally on the Saturday.

The aircraft certainly flew on the Sunday, and it appears that the test flight in the BA 747 with Willie Wash on board was preceded by the Dornier – at least as far as Cardiff. The 747 went on over the Irish Sea to Ireland, while the Dornier turned right and flew to Prestwick. It then flew again on the Monday.

What is more than interesting is the early statement from FAAM issued on Friday 16 April, which stated categorically that the BAe-146 would not be flying to investigate the ash cloud - "primarily because the aircraft is currently on the ground with all instruments removed immediately prior to a repaint." There is also reference to the Dornier being "highly capable".

Clearly though, it was not capable enough and, even with the best will in the world, the aircraft cannot be in two places at once. For a slow-flying turbo-prop with a limited ceiling, characterising the whole extent of the ash cloud, which at times was claimed to be covering the whole of the UK, was an impossible job.

Thus, at some time, the decision must have been made to reactivate the BAe-146. It cannot be stressed enough what an extraordinary decision that was. With the aircraft already stripped down, it must have required a massive – and expensive – effort to get it back flying so soon. This suggests an element of panic, and in high places. Authorisation for that spend and the allocation of the resources needed could not have come from line managers.

Alongside this was the argument about ash tolerances, but this seems more and more to be a red herring, an alibi to justify the prolonged closure and to cover up the lack of data. If the cloud was "undetectable" in some areas, then it was manifestly safe to fly. This, we will have to explore in another post.

Whatever else, though, this debacle must not be allowed to fade away without a commitment to the fullest possible (and public) inquiry. There are huge issues involved here, not least the competence of quango queen Deirdre Hutton and the senior staff of the CAA. If the Tories had any political sense (joke), they would already be demanding such an inquiry. But then, as we have learned to our cost, the Tories rarely indulge in real politics.