The power of prestige 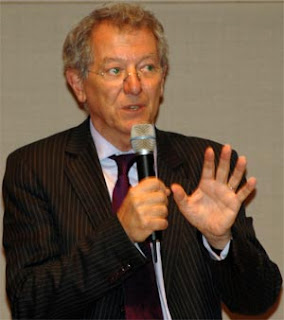 Dominating the front page of The Independent today was a hokum story about the "hacking" of the "Climategate" e-mails being the work of a national intelligence service.

The Mail on Sunday tried this on last December, which we challenged at the time, but the most masterful and comprehensive debunking came from Lance Levsen, a network analyst, who posted his arguments on the blog Small Dead Animals.

Levsen then decided that the simplest explanation was that someone at UEA (University of East Anglia) found the incriminating folder and released it to the wild.

The release of FOIA2009.zip wasn't because of some hacker, he decided, but because of a leak from UEA by a person with scruples. In other words, the evidence points to a whistleblower - an inside job - rather than a hacker, and certainly not a national intelligence service.

Against this, one might ask what induced The Independent to dredge up a tired old story, but the explanation is not difficult to find. In its leading article, it refers to the source, "an eminent figure in the climate field, the former Government Chief Scientific Adviser, Sir David King." The paper continues:

Sir David is not claiming that he possesses hard evidence to support this assertion. Nevertheless, the lightest word of a man who held a position such as he did is heavy.

And, in that last sentence lies the explanation what is going on, which we see courtesy of a nineteenth Century writer, Gustave Le Bon . Sir David possess the quality to which he gives the name of "prestige". Explaining the effect of this quality, Le Bon goes on to tell us – and I quote in full, given its importance and clarity:

Great power is given to ideas propagated by affirmation, repetition, and contagion by the circumstance that they acquire in time that mysterious force known as prestige.

Whatever has been a ruling power in the world, whether it be ideas or men, has in the main enforced its authority by means of that irresistible force expressed by the word “prestige.”

The term is one whose meaning is grasped by everybody, but the word is employed in ways too different for it to be easy to define it. Prestige may involve such sentiments as admiration or fear.

Occasionally even these sentiments are its basis, but it can perfectly well exist without them. The greatest measure of prestige is possessed by the dead, by beings, that is, of whom we do not stand in fear — by Alexander, Cæsar, Mahomet, and Buddha, for example.

On the other hand, there are fictive beings whom we do not admire — the monstrous divinities of the subterranean temples of India, for instance — but who strike us nevertheless as endowed with a great prestige.

Prestige in reality is a sort of domination exercised on our mind by an individual, a work, or an idea. This domination entirely paralyses our critical faculty, and fills our soul with astonishment and respect.

The sentiment provoked is inexplicable, like all sentiments, but it would appear to be of the same kind as the fascination to which a magnetised person is subjected. Prestige is the mainspring of all authority. Neither gods, kings, nor women have ever reigned without it.

Personal prestige, on the contrary, is something essentially peculiar to the individual; it may coexist with reputation, glory, and fortune, or be strengthened by them, but it is perfectly capable of existing in their absence.

Acquired or artificial prestige is much the most common. The mere fact that an individual occupies a certain position, possesses a certain fortune, or bears certain titles, endows him with prestige, however slight his own personal worth.

A soldier in uniform, a judge in his robes, always enjoys prestige. Pascal has very properly noted the necessity for judges of robes and wigs. Without them they would be stripped of half their authority. The most unbending socialist is always somewhat impressed by the sight of a prince or a marquis; and the assumption of such titles makes the robbing of tradesmen an easy matter.

The prestige of which I have just spoken is exercised by persons; side by side with it may be placed that exercised by opinions, literary and artistic works, &c. Prestige of the latter kind is most often merely the result of accumulated repetitions.

History, literary and artistic history especially, being nothing more than the repetition of identical judgments, which nobody endeavours to verify, every one ends by repeating what he learnt at school, till there come to be names and things which nobody would venture to meddle with.

For a modern reader the perusal of Homer results incontestably in immense boredom; but who would venture to say so? The Parthenon, in its present state, is a wretched ruin, utterly destitute of interest, but it is endowed with such prestige that it does not appear to us as it really is, but with all its accompaniment of historic memories.

The special characteristic of prestige is to prevent us seeing things as they are and to entirely paralyse our judgment. Crowds always, and individuals as a rule, stand in need of ready-made opinions on all subjects.

The popularity of these opinions is independent of the measure of truth or error they contain, and is solely regulated by their prestige.

And there we have it. If you have "prestige", like Sir David, you can get away with talking any old tosh, and still be revered. If, like Lance Levsen, you have enormous experience and knowledge, produce a brilliant analysis and come to the best and most reasoned conclusion possible, but lack that essential "prestige", you will be ignored.

"The popularity of these opinions is independent of the measure of truth or error they contain, and is solely regulated by their prestige," writes Le Bon. And that is why the IPCC and Dr Pachauri get away with it ... they too have "prestige".

That is why the likes of Anthony Watts and the many others who are attacking the science cannot prevail. Theirs is a necessary but not sufficient endeavour. This is not about science but "prestige". Their own "prestige" is trumped a thousand-fold. The only sure way to destroy the scam is to rob the players of that vital quality, their own "prestige".