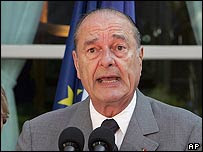 The BBC News website is reporting that Chirac has been admitted to the Val de Grace military hospital in Paris for treatment for a "a minor vascular incident" that has slightly affected his eyesight. An official spokesman says he is expected to remain hospitalised for about one week.

Naturally, the French authorities are downplaying this problem, although this condition has been associated with congestive heart failure and is regarded by some as a risk factor. No doubt the president will be getting the best of treatment in the hospital which was originally scheduled to treat his friend Yasser Arafat when he came to Paris to die last year.

The is no hint that the same fate awaits Chirac, although it has been observed that his early demise, while still in harness, would solve a number of problems for the state prosecutors.