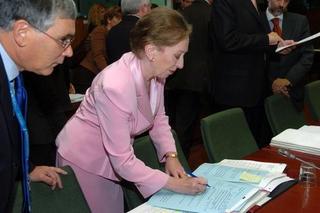 The Agriculture Council, under the chairmanship of Margaret Beckett, met in Brussels today to discuss the vexed question of reforming the EU's 40-year-old sugar regime. On the agenda, in another of those "groundhog day" moments, was a call by developing countries for the EU to reconsider planned cuts in guaranteed sugar prices, arguing that the changes would hurt poor farmers.

With campaigners demonstrating outside, ministers from Fiji, Guyana, Jamaica, Mauritius and Swaziland were holding talks with their EU counterparts on behalf of the 76-nation African, Caribbean and Pacific (ACP) group, while Beckett is seeking an agreement from EU member states on a 39 percent cut in sugar prices to take effect before the end of November. 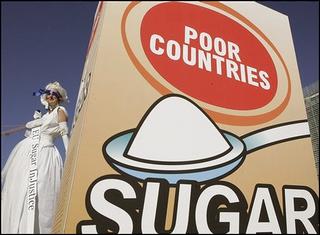 Needless to say, the growers in the main producing countries are against any plan to cut prices, despite the changes being forced on the EU by a WTO ruling last year. Leaders of the pack are the governments of Italy, Spain, Ireland, France and Belgium, which claim that the cuts will hurt local sugar producers.

The initial problem was (and remains) that countries such as France, buoyed by generous CAP subsidies, grossly overproduce sugar grown from beet, and have been dumping it on the world market at cut prices. In so doing, they have undermined world prices, to the distress of growers in countries like Brazil and Australia, which took the WTO action.

Now, the ACP countries, which have special trade agreements with the EU have been caught in the net, and they too are to suffer price cuts. Especially vulnerable are the island economies of the Caribbean, whose sugar cane growers are relatively inefficient and cannot survive without protected access to the EU market.

But, as we pointed out in an earlier post, the problem stems almost entirely from France. It cannot be repeated often enough that, with sugar production in the order of 4.5 to 5 million tons per annum, and a relatively stable consumption of around 2.2 million tons, it was France which was responsible for the larger part of the dumping, accounting for 2.5 and 3 million tonnes a year of the four million surplus.

The EU-15 produced just over 17 million tonnes in 2003/4, and consumed slightly over 13 million. Thus, French over-production accounted for almost the entire EU surplus and, with no ready internal market for it, the only option was dumping on the world market. And, to remedy the problem, everyone has to suffer. Instead of just cutting back the French quota, and restricting the area used for sugar growing, the commission has opted for an across-the-board cut in the price support regime, which Beckett is trying to get agreed.

But there is a more fundamental issue which the EU is also failing to address. Basically, there is no case for the temperate production of sugar using sugar beet. This crop, at best, can deliver a mere three tons per acre, compared with nine tons per acre routinely obtained from sugar cane in tropical climates. It would make far more sense to devote the five million acres devoted to beet growing in just the EU-15 to other crops. 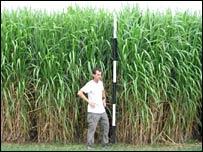 A sensible alternative, much canvassed by both the "Greens" and the farming community is biofuel, and in particular Miscanthus elephant grass. The crop requires little in the way of artificial fertiliser, next to nothing by way of pesticides and harbours a wide variety of wildlife. The current EU-15 acreage devoted to beet could produce the energy equivalent of 75 million barrels of oil and even at a modest $60 a barrel, this would equate to a saving of $4.5 billion on imported energy.

But such are the vested interests, and the inflexibilities of the CAP that energy production is pushed into a separate compartment. Swapping over the sugar support regime to kick-start a biofuel programme simply could not be done within the existing EU framework. We could do it ourselves, of course, but for the tiny problem that we are also locked into the CAP, this leaving Mrs Beckett, all dressed up in her pink finery, to rescue the French producers.