On this blog, we have constantly voiced concerns about an excessive dependence on European military equipment, arguing that such reliance compromises our strategic independence. Now, it seems that we are not alone. Similar concerns are being expressed in the United States over the Pentagon's dependence on German computer software for some of its key functions.

The concerns are articulated by Frank Gaffney Jr, in the current edition of Jewish World Review, also published in the Washington Times on 20 September.

Years ago, he writes, the peace movement came up with a catchy rhetorical question: "What if they had a war and nobody came?" Incredible as it may seem, Gaffney continues, the Pentagon may be poised to find out what happens if the US military cannot get to a war without permission from an unlikely quarter: our sometime "ally," Germany.

Gaffney believes that recent developments make it increasingly likely that America will have to use force to prevent the terrorist-sponsoring Islamofascist regime in Iran from wielding nuclear weapons against the United States, their interests and friends. The brazenness of the Iranians, he writes, has flummoxed the so-called EU-3 - Britain, France and Germany – "who have been trying to appease the Iranians into making empty promises to give up their nuclear ambitions."

He argues that the Chinese and the Russians will now move to prevent sanctions being imposed by the United Nations and block any authorisation of the use of force. Thus emboldened, Iran is taking steps that will enable it directly to threaten to do to the entire United States what Hurricane Katrina did to one region's electrical grid, energy resources, telecommunications systems and other infrastructure: Cripple them. 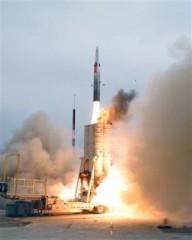 Gaffney cites a 2004 report of a blue-ribbon commission tasked with assessing the threat of electromagnetic pulse (EMP) attack on the United States, which finds that Iran has demonstrated the ability to conduct such a devastating strike. It has launched a short-range missile from a ship. It has also tested its new, medium-range Shahab-3 ballistic missile in a manner consistent with detonating a nuclear weapon in space - the scenario the EMP Threat Commission said could cause "catastrophic" damage to the US.

Now, adds Gaffney, come published reports that the Iranians are not only obtaining the capability to go to war with the United States. They are persuading themselves that they can do so successfully. Such circumstances may compel the United States to act forcibly against Iran, but it is not clear whether the Army, Navy and Office of the Secretary of Defence, and perhaps the Air Force, will be able to participate in any such operation.

The problem, it seems, is that the first two of the US armed services and the Pentagon's civilian bureaucracy rely upon a German software company called SAP to handle their administrative and logistics functions. All other things being equal, the Air Force may decide to follow suit by month's end.

As a result, Gaffney concludes, any future military operation against Iran might have to be conducted exclusively by the US Marine Corps. For that service alone has decided to use an American software firm to meet the information management needs associated with things like day-to-day operations, personnel, the location, storage and movement of weapons inventories, financial matters (like bank accounts) and other, often prosaic, but vital functions.

Given the overt anti-American stance of Germany and its opposition to the Iraqi War, the danger is that, if Schroder manages to hold on to the reins of power – which looks increasingly likely after last week's inconclusive elections, he might use that power to block any US military action against Iran by prohibiting the German software company to support products used by the Pentagon.

This scenario is further complicated by the fact that the company "distributes SAP solutions" in Iran and the sort of software it uses to support the US military is available for sale to others with whom the German government has no problem doing business. "Insights the Iranians glean from their access to SAP programs could facilitate cyber-warfare aimed at disabling ours," Gaffney asserts.

Even if SAP were doing its job for the Pentagon competently - and successive Government Accountability Office reports demonstrate that it is not – Gaffney argues that "it is foolish at best and reckless at worst to have our military dependent upon foreign suppliers for such critical functions." He adds:

After taking testimony in July about such vulnerabilities, House Armed Services Committee Chairman Duncan Hunter promised to hold oversight hearings about the armed services' seeming unconcern about relying upon possibly unreliable purveyors of vital components, materials and technology. They can't come too soon. At the very least, the Marines could use help from the Air Force if it comes to blows with Iran. That may only be possible, however, if someone decides our airmen - unlike their Army and Navy counterparts - should be supported by software that doesn't give Germany a veto.

It would be easy to dismiss Gaffney's concerns as paranoia, except that the UK has had direct experience of European suppliers withholding war materials because they disapproved of our policy – as did the Belgians during the first Gulf War. It is thus far from fanciful to suggest that the German government might seek to exercise its power over its domestic companies to disrupt US war plans.

And, with Tony Blair refusing to rule out military action against Iran – if for no other reason than to keep all options open – the UK could find itself in a similar position. Germany, with the almost certain backing of France, could progressively withhold support for the increasingly wide range of European military hardware on the inventories of the British Armed Forces.

Should this happen, you can imagine the squawks of indignation from the likes of The Sun – just supposing the UK government chose to reveal that its had been blackmailed by its so-called "partners". It is a pity, therefore, that the media cannot address this issue now, when there is still time to do something about it.