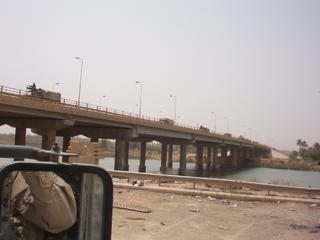 The front page of DefenseNews this week is dedicated to a story on how US military intelligence failed during an important attack on a Euphrates River bridge at the height of the Iraq War in April 2003.

The story, headed "Network Centric Blind Spot Intelligence Failed To Detect Massive Iraqi Counterattack", has massive implications for the UK and other EU governments, which are currently reorganising and re-equipping their forces on "network centric" lines, to facilitate development of the European Rapid Reaction Force (ERRF).

And while the US is ploughing billions of tax dollars into addressing the causes of the failures experienced, there is no indication that the European – and especially British - governments are prepared to spend the same amount of money, leading to development of systems that appear to be similar to those of the US, but which have all the flaws and none on the advantages.

The attack, around which critical failures occurred, took place on 2 April 2003, when a single U.S. Army battalion seized a Euphrates River bridge, designated Objective Peach, located about 20 miles southwest of Baghdad in the Karbala Gap.

This was Task Force 3-69, comprising 1,000 soldiers supported by just 30 tanks and 14 Bradley fighting vehicles, which held the bridge for 24 hours, turning away a punishing Iraqi counterattack from 8,000 Iraqi soldiers backed by 70 tanks and armoured personnel carriers in the largest force-on-force battle of the Iraq War. Yet the intelligence system failed completely to detect the Iraqi forces and the intelligence officers who had relied on satellite imagery had concluded that Objective Peach was undefended.

At the time, the US Army's battlefield information networks were the most advanced ever fielded. Ground units carried a GPS-based tracking system known as the “Blue Force Tracker” (BFT) battle command system, which showed friendly forces as blue icons on a computer map, and automatically updated their locations. The problem was that enemies — red icons — had to be manually entered by intelligence officers at division and brigade headquarters who learned of enemy positions from satellites, unmanned aerial vehicles and other airborne sensors. 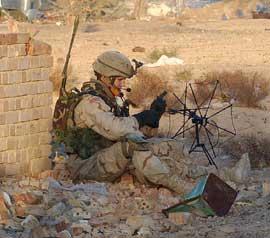 To get that information down to unit level, the forces had to tap into the Army’s communications network. But this could only be accessed when the units halted and set up complicated antenna arrays. Even then, the communications system was so overloaded that data transfer could take hours and frontline units rarely got what they needed even when they stopped. This soon became known as the digital divide: at the division level and above, the view of the battle space was adequate, yet among the front-line troops the situational awareness was terrible. 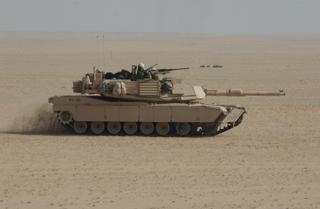 What saved the day what the fact that the US forces were equipped with Main Battle Tanks like the Abrams (pictured left) which could sustain direct hits from the Iraqi tanks and survive. Iraqi vehicles would go up like a Roman candle when struck by US shells. As a result, just eight US soldiers were wounded, none seriously, during the bridge fighting. If the army had been using light armoured vehicles, many more would have been killed and the force could even have been overrun.

Despite this, the US Army is continuing with its plans to replace heavy tanks with lightweight vehicles, all to enable rapid deployment by aircraft. But, learning the lessons of Objective Peach, the US is investing $123 billion dollars in what is known as their Future Combat System (FCS), including no less than $23 billion to upgrade their communications.

At an early stage, the British government had the option of working with the US on FCS but, while it has bought into the concept, its has decided to develop its own system known as the Future Rapid Effects System (FRES), a £14 billion project which also aims to harness the power of Network Centric Warfare. This is to enable it to develop, alongside like-minded European governments, the autonomous EU military capacity, focused on the European Rapid Reaction Force. 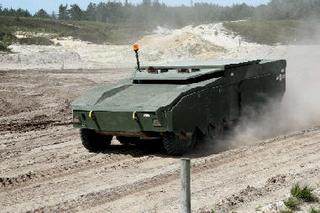 With that, it is already planning to cut its two heavy armoured divisions down to two brigades, replacing – in theory – the striking power by three medium brigades using lightly armoured, air portable vehicles, which will form the core of the ERRF contribution. Only last month, the MoD launched its first FRES platform contract, a technology demonstration programme, awarded to General Dynamics to test a wheeled hybrid electric drive system (see above). 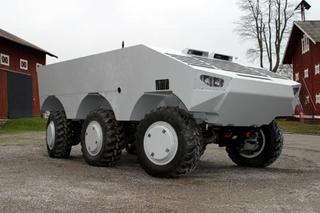 Another contract is expected to be awarded shortly, this one to BAE Systems to front the Swedish designed SEP project, which already has a demonstration vehicle up and running. Both types demonstrate the intention to develop lightweight, wheeled armoured vehicles. With the UK government having already signed a co-operation agreement with the Swedish government to develop this vehicle, there is a distinct possibility that the British Army, in the future, could be fielding something like the SEP vehicle (illustrated above) instead of its Challenger tanks and Warrior armoured fighting vehicles.

However, the British investment in communications does not even begin to match the $23 billion expended by the US, as we will be relying for communications and data transmission on the £1 billion Bowman system. This allows "high capacity data radio", augmented by the “Falcon” communications system, only at senior commanders level.

In effect, therefore, the MoD is planning to send our troops into battle with equipment that does not allow for transmission of detailed intelligence data to units in the field, which means that they will have limited situational awareness. We will, in effect, risk replicating the situation that Task Force 3-69 found itself in during its attack on Objective Peach. The difference will be that our forces will be without the heavy armour that saved the US forces from serious casualties.

Yet, there is actually no way we could – or are prepared to – afford the investment required to develop a fully network centric system and neither are European governments, which have dropped their overall defence R&D budgets to less than one-fifth of the US spend, amounting to €12.5 billion compared with €61.5 billion in the United States.

Short of paying the money, the only way we could remain at the "cutting edge" of military technology and capability is to link with the Americans, and tap into their technology. But such is the determination of the Blair government to distance us from the US, in order to take a full part in the ERRF with governments that are similarly unwilling to expend the necessary funding, that this is no longer a political option.

This means that the British government with its European "partners" are indulging in a collective fantasy that they can somehow match the US capability, without spending the money. The result will be, according to one senior military man I talked to recently, RAF C-17 transports full of body bags.