They are beginning to notice 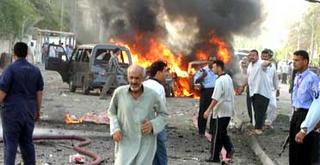 The Daily Telegraph has finally decided to send a reporter to Basra to see what is happening in the area of Iraq under British control. (Well, nominally, at least.) And guess what Adrian Blomfield found?

“But only in the past year has Basra established a reputation as one of Iraq's most radicalised cities, where the most extreme strictures of Islam are enforced by bearded men with automatic weapons.”

How very odd. I believe, this blog has written about this several times, most recently here. Then and before we suggested that the British media would do well to start paying attention to what is going on in Basra instead of bleating about the imminent but never quite realized civil war in Iraq.

We have mentioned Steven Vincent’s murder after he had published an article in which he had pointed out that the British authorities were singularly uninterested in developments under their very noses and, indeed, the murder of his colleague, Fakher Haider.

Well, better late than never, I suppose, but Mr Blomfield is a little surprised to find that

“Britain's previously praised "softly, softly" approach is being unravelled by a group that exerts authority at all levels of society. Terror is inflicted on Basra's civilians by up to 10,000 militiamen who owe their allegiance to Jameat commanders and are often issued with police uniforms but are essentially outside the force.”

Who on earth praised it? Not people who were trying to analyze the situation; not journalists who actually went there; not those few locals who dared to speak up.

Belatedly, we are told that

“Many blame the British for allowing Jameat to flourish and then not doing anything to stop its excesses.

"They haven't stopped Iranian infiltration," said a US commander. "Militia proliferation has been allowed to go unchecked.

"The Brits have done some great work but they've also misread the situation,which is kind of inexcusable." British officials say that in the post-invasion chaos it was impossible to check recruits. "We have raised our concerns [about Jameat] repeatedly and haven't had the response we require," said one diplomat.”

Well, blow me down. Perhaps, this will encourage our super-duper journalists to read some blogs. Just a thought.