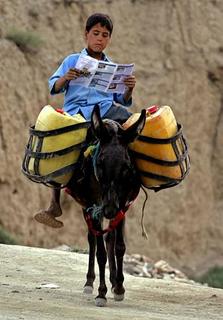 That great and wonderful institution, the European Parliament (average cost over £1 million per year per member) is doing its best to fight for democracy. Well, no, now that you ask they are not going to reform themselves, claim fewer perks, have proper debates or start looking at the lack of democratic unaccountability in the European Union.

No, they are going to supervise elections in Afghanistan. According to EP News, September 15, 2005, No. 228: “MEPs MONITOR ELECTIONS IN AFGHANISTAN

Robert Evans (Labour, London), Richard Howitt (PES, UK) and Baroness Nicholson of Winterbourne (ALDE, UK) are members of a European Parliament delegation to monitor elections in Afghanistan on 18 September. In the run-up to the elections, MEPs will visit different parts of the country and meet with political leaders. The delegation will leave Afghanistan two days after the elections, on 20 September.

Strangely, there is no information as to how many people actually voted for the individual members of the delegation. But, at least, an account of their expense accounts would encourage more Afghanis to stand for their parliament.