She is finally engaging in the fight 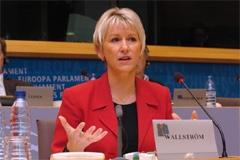 It seems that the Fragrant Commissar has finally decided to engage in the fight directly. She is taking on the eurosceptics in her own condescending fluffy-bunny manner. (I think I had a teacher like her once, many years ago, and she had a terrible time with us.)

The person she is focusing on is John Archer (whom we know on our forum as well). First she lectures him on democracy, kindly explaining that the modern version is different from the ancient one. Well, yes, it is, but that is hardly relevant to the discussion of what modern democracy is about.

In a very understanding manner she says:

“Ok, let‘s talk about democracy: are you saying that democracy can only exist at nation state level? That a “demos“ can only be defined within national borders? To me this is outdated.”

Outdated or not, the European demos is not appearing, and the Fragrant Commissar remains an unelected, unaccountable legislator. Nation states are not necessarily democracies but so far no transnational organization has shown the slightest capability of being even remotely democratic. Furthermore, they tend to despise or loathe democratic structures.

And how about this? The Fragrant Commissar explains her views of what scepticism should be about:

“I am sceptical/negative towards bureaucracy and elitism and pompous people but I can also acknowledge the positive historical role – and I see a future role – of this European construction of cooperation.”

Stop sniggering at the back. The teacher is speaking.

Can one be sceptical towards oneself? Why not? But can the lady ever tell the truth? I think not. For we can all see a future role for European co-operation (and, indeed, a past role) but what she is part of is a future single state. That does not seem to have a positive aspect to it for those of us who believe in freedom and democracy rather than a huge centralized bureaucratic behemoth.

If Margot really believes what she says, she is stupider than anyone has really thought:

“I think that nationalism is a very dangerous phenomenon and offers no solutions to today‘s problems that travel across borders. In a globalised world States can no longer always act alone to solve problems. This is a challenge for democracy. The problem is not the integrated global economy; the problem is the lack of integrated global governance. Our institutions and political systems are still mainly national and not adapted to tackle the new circumstances. Global economic forces are a tremendous powerhouse of energy but it is up to global democratic politics to harness that energy and channel those market forces. Some of you think the EU should be just a free trade area. I disagree.I could say a lot more but I will leave it for another day.”

There is no particular reason why nationalism should be dangerous. It might be or it might not be. The two most dangerous ideologies of the twentieth century, Nazism and, especially, Communism were transnational and millions of people died as a result of them being implemented (thankfully unsuccessfully).

Surely, even someone as ignorant as the average Commissar should know that.

As for nation states not being able to cope with a global economy – well, I don’t know. There seems to be rather a lot of them who can do it very well. I am not talking just about the United States or India or Australia but smaller ones like Switzerland, Japan (which is climbing out of its recession), Singapore and various others.

And finally, global democratic politics? Just precisely how is that going to be set up, given that even democracies do not agree on exact definitions and most of the world is not run by democratic governments? How are we going to have a global accountability? As we do in the corrupt and unaccountable UN?

I assume the Fragrant Commissar considers herself to be a democratic politician. How very rum.