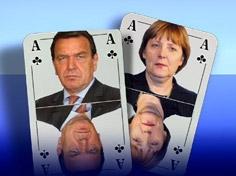 As the various negotiations between Angela Merkel and Gerhard Schröder proceed apace (at the pace of an arthritic snail, as it happens), the EU has decided to get in on the act.

This time it is not Commission President Barroso who is demanding that the Germans get their act together (a somewhat inappropriate attitude) but Joaquin Almunia, the Commissar for Economic Monetary Affairs.

The problem, as ever, is the Growth and Stability Pact and while member states have largely forgotten about its existence, the Commission has not.

Germany is once again on track to break the budget deficit rule of 3 per cent. According to Deutsche Welle

“The Federal Statistics Office said in August that Germany's budget deficit in the first half of the year was 36 billion euros ($43.3 billion), or 3.6 percent of GDP, putting the country on track to violate the pact for a fourth year in a row.

Eurostat, the European Union's statistics office, believes Germany's deficit will be closer to 4 percent because it doesn't look at the sale of outstanding accounts to the former state-run enterprises Deutsche Telekom and Deutsche Post as deficit-reducing measures.”

It seems rather unfair as France and Italy both managed to get into the euro by rearranging ownership of assets and pensions but Almunia is indicating that he has had enough.

He is threatening to invoke the punishment that is his right under the rules of the Pact. Germany could be fined €3 billion in the circumstances. It has been pointed out before that fining a country that is having problems with its budget deficit is hardly the most sensible solution as that will increase the problem.

Whether the biggest country and largest net contributor to the EU budget will be punished by the Commission remians questionable. In any case, all German eyes remain firmly fixed on the political stalemate.