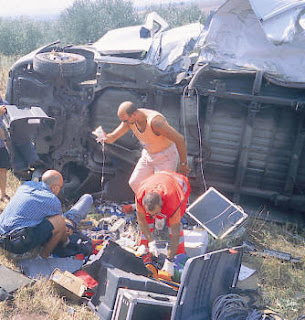 It is a measure of the level of distrust of the European Union than news of the failure of plans by the EU to introduce a potentially life-saving system can only be greeted with unalloyed relief.

The system in question is known as eCall, which automatically generates an emergency mobile phone call the emergency services, in the event of a car crash, triggered by sensors inside the car. The system informs the services of the vehicle location, thus enabling a rapid response.

However, while the EU commission "agreed" with the automotive industry that all new cars in the EU would be equipped with the technology by 2009, according to Reuters, of the 25 EU member states, only Finland and Sweden have agreed to install the equipment needed for emergency centres to receive the calls. Although Germany is set to sign up soon, that still leaves 22 countries who have not made any plans.

The EU Commissioner for Information Society and Media, Viviane Reding, yesterday told the Frankfurt car show on Wednesday that eCall could save 2,500 lives a year. "This is the life saver," she said, "because it works whether the accident victims are conscious or not."

What Reding did not say, and the EU publicity seems to avoid emphasising, is that to use the service, cars must be fitted with Galileo satellite positioning receivers. Linked to the mobile phone, it is this enables the emergency services to locate vehicles in distress.

But, once the equipment is installed, there can be no guarantee that it will not send signals unbidden, thus enabling the authorities to keep track of unsuspecting motorists. Furthermore, exactly the same technology is used for road charging schemes and automatic speed limiters. Almost certainly, many motorists would be reluctant to have the equipment fitted to their cars if they knew its full potential.

How clever of the commission, therefore, to "sell" the system as a life-saver, gulling the unsuspecting into fitting what amounts to a Trojan horse. Tough really that, once again, the member states have messed up its plans.