The next member of our government? 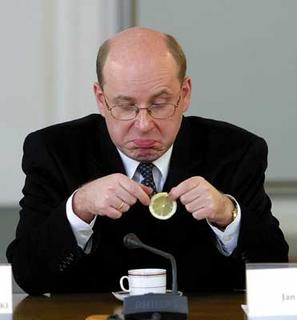 Poland goes to the polls today to elect its new government, an event which is given remarkably little attention in today's newspapers, despite the fact that, whoever becomes the prime minister will form part of our government, through the European Council.

At least The Sunday Times does do a piece, although it is way down in the “book”, predicting that Jan Rokita, 46, the Anglophile leader of the centre-right Civic Platform party, will be the victor.

He is an "avowed admirer" of Thatcher and Blair, and could prove a useful ally in the coming battle over the EU budget, which has been so assiduously avoided by the Blair EU presidency.

However, there is much more to Rokita than the determinedly Ango-centric account given by the Sunday Times. He is, amongst other things, an Atlanticist, favouring much closer defence ties with the United States, and thus could give strong backing to Finland in its forthcoming presidency, when it argues against the EU assuming a separate defence identity.

For more detailed coverage of the Polish elections, you can do no better than have a look at the excellent Beatroot blog. As always, if you want the news in detail, the blogosphere is the place to go.