You can't be serious!

This is not meant to be a defence blog and neither is it. Discerning readers will have noted, however, that there has been a certain emphasis on this issue, but the emphasis is for good reasons.

Firstly, despite the EU constitution ratification process being temporarily stalled, defence integration is continuing apace, and has become the vanguard issue in the continuing process of European political integration. Secondly, at the current rate of integration, we are at risk of losing entirely any independent defence capability, with all that means for our status as a sovereign nation.

Thirdly, for reasons which remain mysterious, the mainstream media seem to have given up even a pretence of serious reporting on defence issues, which leaves to the blogs to pick up the slack.

That said, in today's Guardian, we have interview with John Reid, secretary of state for defence (left), in which he is said to be seeking a "debate on ageing Trident" – i.e., the replacement of our nuclear deterrent. Within the piece, though, there is a statement which, evidently, is not open to debate. Regardless of any decision (on the nuclear deterrent) says Reid, "spending would have to be tightened, with greater European co-ordination on procurement."

It is that latter statement that chills the blood, an acknowledgement – albeit elliptical – that the government is indeed adopting a "Europe first" policy on defence procurement.

Despite this, when Reid's minister for defence procurement, Lord Drayson, addressed the Royal United Services Institute yesterday, on "Military Capabilities in the 21st Century", he was guarded in his speech.

He was sure, he said that his audience would be "trying to parse my remarks for whether I am advocating wholescale protection for UK industry, 'Fortress Europe', or 'Buy America'", saying that he did not meant to convey any of those things. "There will be areas where appropriate sovereignty requires on-shore supply," he said. "There will be some we can procure from the global market. And there will be a third category which can be procured in co-operation with partners – continental European, or American."

"European and transatlantic purchases each have their own characteristics, and it is no secret that either situation can be frustrating at worst," he pointed out, adding, "We tend to forget they can also be extremely successful. For example, the Storm Shadow cruise missile within Europe…" (pictured left).

Unfortunately, no reaction is recorded to this claim, but one really wonders what was going through the mind of the minister as he made it. The Storm Shadow is, of course, the "million pound bomb" that we featured in an earlier posting. It is a French designed weapon, built by Matra Défense for the French Air Force under the name SCALP EG and has been built for the RAF by Matra BAe Dynamics. 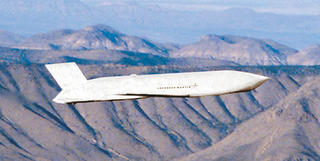 In the sense, that it actually works, I suppose it can be considered a success, but it is heavier, with a shorter range than the equivalent US missile, the Joint Air-to-Surface Standoff Missile (JASSM) - see right, which has a significantly lower price tag of $300,000 (£167,000). We have bought 900 Storm Shadow missiles at a cost of £981 million, whereas the same number of JASSM could have been purchased for £150 million, saving the taxpayer over £830 million.

That, it seems, is Drayson's definition of "extremely successful", and John Reid wants more of it. One is reminded of another the catchphrase of another John – John McEnroe: "You can't be serious!"