Mark Steyn is on fine form today in The Telegraph, dissecting Ken Clarke, his leadership ambitions and the Conservative Party.

"A party out of power for a decade," he writes, "naturally finds itself somewhat short of household names, and, as one of its last surviving big beasts, Ken lingers vaguely in the memory…"

Therein lies the problem, with the Party clutching at the illusion that, because the EU constitution has been booted into touch "it's safe", as Steyn puts it, "for the Tories to elect a Europhile leader because his ability to stiff them has been severely constrained." 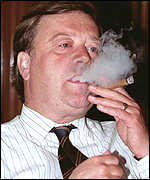 "Only Ken can go to Europe", adds Steyn, is a weird post-modern inversion of the "Only Nixon can go to China" rationale: Mr Clarke wants to get credit as a straight-talking man of principle for refusing to equivocate about his willingness to sell Britain out to a European superstate, while simultaneously preserving his political viability on the grounds that, even though he's willing to sell out, nobody in Europe's interested in buying.

Steyn points out that the cynical argument in favour of a Clarke leadership victory is that "he'd be the final nail in the Tory coffin and open up space for a new party on the Right and a long-overdue realignment in British politics." But it never works out like that. More likely, Ken's men would lose just slightly not too badly enough to linger on ineffectually and diminish British conservatism for another half-decade.

Steyn's view is that this is a time for strategy, not tactics. It is in that department that Clarke fails to meet the minimum qualifications for even the squishiest "Conservative" leader. He adds:

On Europe, the Conservatives ought to be committed not just to bland assurances not to worry, no need to frighten the horses, old chap, everything's on the back boiler now, but to an explicit reassertion of national sovereignty: over-Europeanisation as represented by, for example, the Convention on Human Rights is an obstacle to the effective defence of the realm, and if Tories won't stand up for national security, what are they for?

What indeed, you might ask, and it is extremely timely that Steyn should be articulating the question that many others, behind the scenes, are asking. For sure, there are enough Party members who are stupid enough – or lack sufficient moral base – to fall for the Clarke line that the Conservatives should put power before ideology but, as one recent correspondent wrote in the Telegraph, if that was enough, then there is always New Labour.

Steyn thus argues for principled Conservative leader, concluding his piece with a finely honed pay-off line: "I don't know quite what the leader of a culturally confident British Conservative Party would look like," he writes. "But, if you had to construct his precise opposite, he'd be a lot like Ken Clarke."

In a letter shortly to be published by The Daily Telegraph, twenty or more Conservative MPs will argue that electoral success will not be achieved by personality but by principle. Steyn reminds us that Clarke is the "personality", but will the Party be wise enough to go for principle?