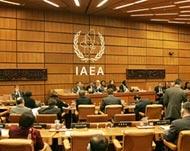 As predicted by Frank Gaffney in our earlier posting, Russian and Chinese "diplomacy" on Iran has prevailed and the EU has backed away from its attempt to have Iran immediately called before the UN Security Council over its nuclear programme. This represents a humiliating climb-down for the EU and marks the ultimate failure of its "soft power" approach to world affairs.

Despite bellicose language from the over-mighty EU, all we got at a meeting in Vienna today of the International Atomic Energy Agency's 35-nation board of governors was a statement from Russia, China and non-aligned nations rejecting the reference to the UN Security Council, citing fears that trade sanctions could draw sharp retaliation from the oil giant.

Iran, predictably hailed the climb-down as a "significant victory" with Iranian negotiator Javad Vaeedi claiming that Iran's "strong diplomacy" had pushed the EU to drop its Security Council push. "Our firm stance, China and Russia's backing and also a lack of legal basis caused the EU's withdrawal," he told reporters in Vienna.

So far, therefore, years of "soft-power" diplomacy have got the EU precisely nowhere, with Iran now cock of the walk, still intent on pursuing its nuclear programme. One wonders what the EU will do for an encore.