A request for EU aid for Katrina victims, made directly to the United Kingdom in its EU presidency capacity, was turned down last week by British foreign minister Jack Straw (left).

His refusal came at last week's disastrous meeting of EU foreign ministers in Newport, despite the Irish foreign minister, and others, calling for an organised joint EU aid operation.

According to one witness, Straw blocked calls "for rather vague reasons." He "inarticulately mumbled" that India might be upset because it had received no EU aid when the country was struck by floods. "It was clear that he did not intend to grasp this opportunity to give the EU more visibility," a senior official who attended the meeting said.

As a result, according to the Belgian daily, De Standaard, the twelve EU member states who sent aid have done so on an individual basis. Their efforts involved neither "EU" aid, nor EU money. 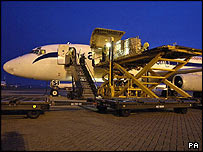 The EU commission was not directly asked for aid, as the request was made to the UK presidency. All the commission is doing, therefore, is handling the practical coordination via the Monitoring and Information Centre of the EU Commission's Environment Directorate. It is striking, says De Standaard, that this aid will not be labelled as EU aid. The EU has not allocated a budget either. The member states themselves will have to bear all the costs.

Of course, there was nothing to stop the commission making an unsolicited donation to the American Red Cross, but at least it had the (somewhat lame) excuse that it "wasn't asked". Mr Straw's excuse is somewhat less plausible.

Typically, the BBC got it wrong: "EU sends aid to Katrina victims" blared its website two days ago, its report archly ending with a dig at the US, saying: "…its call for European and international help shows that, after the divisions over Iraq, it has now realised that even superpowers need friends."

Friends it may need, but – contrary to the triumphal BBC report – the EU isn't one of them, and neither is British foreign minister Jack Straw.