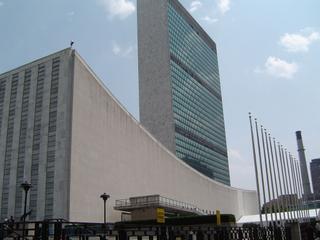 Next week's grand UN summit is looking more and more like a damp squib. And it looks as if the British Government will be on the wrong side of the debate. Well, that is hardly unusual.

We have already mentioned Jack Straw’s inexplicable support for Kofi Annan on the day of the damning Volcker report (and it was not as bad as it could have been) but it seems that he is not alone. The entire government and the Foreign Office are right there with him. What a surprise, eh?

From the Sunday Telegraph we find out the delightful detail that Mr Straw’s support was given to SecGen Annan over dinner at Le Gavroche restaurant. How very pleasant. This Mayfair restaurant, run by Michel Roux and named, incongruously, after a street urchin in Victor Hugo’s mammoth novel Les Misérables, happens to be one of the most expensive ones in London. One cannot help wondering who picked up the tab, though it probably does not matter in the long run. You and I, dear reader, pay for these jollifications and there are plenty more that we do not find out about.

The article then continues:

“Immediately after the damning oil-for-food report was released to the Security Council on Wednesday morning, Sir Emyr Jones Parry, the British ambassador to the UN, led Britain's public response by placing blame for the fiasco on Saddam Hussein.”

Well, far it be from us to exonerate former President and Tyrant-in-Chief Saddam Hussein, but is there not some responsibility resting on the wonderful transnational organizations which was supposed to supervise this whole scheme? And which, by the way, made very little effort to get rid of the said Tyrant-in-Chief, possibly because of a nagging awareness that with coalition troops sweeping through the country the oil-for-food scam will not stay secret for long.

Mr Blair and Mr Straw, it seems, are long-standing admirers of the SecGen Annan and consider his presence absolutely vital to the reform of the UN. One rather wonders why the UN should need reforming if it has been led for some years by this amazingly good and honourable personality.

Just in case there is anybody among our readers who cannot remember the highlights of SecGen Annan’s career, let us recall some of them. He was responsible for the UN shambles in Rwanda as the then operational chief. It led to a million and a half deaths.

Under his leadership, the UN has gone on being high-spending, terrorist supporting and seriously anti-semitic.

On SecGen Annan’s watch we have had the half-hushed up scandal of UN troops raping and buying the sexual favours of under-age girls in DR Congo.

We have also had the completely hushed up scandal of sex trade conducted by UN troops and officials in the Balkans.

While Annan has been SecGen, the UN has not been able to sort out Iran and has failed miserably in the Sudan, particularly in Darfur.

One official after another has had to have his diplomatic immunity lifted for the FBI to arrest them and charge them with various forms of embezzlement. There have been scandals of sexual misdemeanour of very unpleasant kind among the higher ranking staff.

I need not go on. The man in charge of this complete and utter mess is one who is highly regarded by the Prime Minister and Foreign Secretary of this country. They think that he is indispensable to the projected reform of the entire organization.

"We genuinely hold Annan in high esteem," said a senior Straw adviser. "We believe he's good news and he wants to do the right things." None the less, senior diplomats who back Mr Annan privately acknowledged that in other walks of life - either business or government - he would have had to quit following last week's report. "That's just not the culture here," admitted one official.

That’s just about the size of it. In the meantime, what of that famous reform? Well, there is the proposal to increase the Security Council. As The Business puts it:

“The reform's centrepiece was expanding the UN Security Council beyond the five permanent members - the US, UK, France, Russia and China - and 10 non-permanent members elected to two-year terms. Annan laid out three scenarios for enlargement and all failed due to regional rivalries. Argentina and Brazil,India and Pakistan, Germany and Italy, and Japan and South Korea fought each other over new permanent seats. There will be none for the foreseeable future.”

This probably will not happen but, on the whole, I fail to see why it should make any difference. Of course, with more members on the Security Council that body will be in a permanent log-jam, which has certain advantages but it does not precisely make the UN more accountable for its actions.

The other important part of the “reform”,

“Annan's attempt to get rich countries to commit to foreign aid of 0.7 percent of their national gross domestic product, which he claims would halve world poverty by 2015, has also foundered. The European Union has made such a commitment; Washington has refused.”

Good of the EU to agree on the member states’ behalf. They, of course, have already made it clear that the money will not, in practice, be forthcoming, which is just as well, when one looks at the UN’s past record. Just precisely why giving more money and power to an organization that has proved itself to be inefficient and corrupt should be described as a “reform” passes one’s understanding.

Naturally, much of the blame for the fact that the jamboree this coming week will fail is being laid at John Bolton’s feet. He and his government should not have produced 29 proposed amendments so late. Mr Bolton’s response, when he stopped laughing, was that the American proposals had been first presented on June 25, hardly at the last minute.

And, as some British diplomat has pointed out, everyone is getting in there, amending this, disagreeing with that, demanding something else. The Business says:

“Another failed US and EU proposal is creating a human rights council to replace the UN human rights commission, discredited for allowing rights violators like Libya and Sudan to sit on it. But Cuba, Syria and Pakistan, with the support of Russia and China, have killed it.”

The Telegraph adds other details:

“Ahead of the summit, Britain has led efforts to secure an unequivocal UN condemnation of terrorism - considered a priority by America and the EU after the September 11 attacks and the Madrid and London bombings.

The Palestinian delegation, Egypt and Iran are leading efforts by a mostly Muslim and Arab bloc to add a qualifying paragraph that effectively excludes acts committed in support "of the struggle for independence" from the definition of terrorism.”

This leaves the matter where it was as one man’s terrorists is another one’s fighter for independence. Anybody’s independence.

This reminds one of that wonderful scene in the Marx Brothers’ film A Night at the Opera, when Groucho presenting himself as the representative of the New York Metropolitan Opera tries to sign up a tenor and negotiates with Chico, who, actually, “represents” the wrong singer. As they cannot agree on any of the articles of the contract, they tear each one off as one or other objects, till finally they are left with tiny scraps of paper and a “Sanity Clause”. (“Aw, you’re crazy,” – says Chico. – “There ain’t no Sanity Clause.”)

In the meantime, the editorial in the Sunday Telegraph has reiterated its sister paper’s call for SecGen Annan’s resignation.

“[The UN’s] institutional inability to hold anyone to account for their failings guarantees that those failings infect the UN at every level. As a result, the UN is comprehensively incapable of doing anything effectively.Keeping Kofi Annan will send a very simple signal to every one of its bureaucrats: your job is safe, no matter how serious your incompetence.”

The article dismisses the British government’s argument that Annan’s dismissal would alienate the developing countries (I thought it was the fact that Annan is such a wonderful person):

“But there is no point in an incompetent UN whose only function is to provide tax-free jobs for fat bureaucrats from Third World nations. If the UN is to achieve any of its noble and laudable goals, it needs to be a minimally efficient organisation. That requires root-and-branch reform. Without it, the organisation might as well cease to exist.”

Well, well. So the unthinkable is being thought and said.