A bonfire of frogs' legs 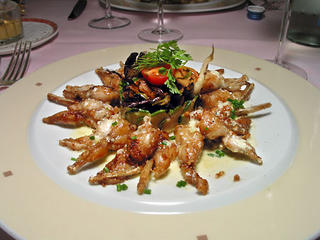 So big was the package which arrived today that the postman could not get it through the letter-box. This was the consultation on the new Draft Food Hygiene (England) (No 2) Regulations 2005, bringing UK law into line with the latest EU regulations, including – you will all be pleased to know – "Creating an offence for failure to comply with certain aspects of Commission legislation on Trichinella in meat" - a condition not found in the UK in living memory.

Readers will also be delighted to learn that the Commission has also provided a "Model Health Certificate for Imports of Chilled Frozen or Prepared Frogs' Legs Intended for Human Consumption", the statutory form demanding to know, amongst other things, the "animal species" from which said frogs' legs were obtained. Presumably, this is to comply with the "Frogs' Legs from Species other than Frogs Regulations", buried somewhere in the deepest recesses of the Commission.

So much for Barroso’s latest weeze , his proposal unveiled yesterday with great fanfare to "withdraw one third of screened proposals". This, for the uninitiated, is Eurospeak for "deregulation" which, of course, does not actually involve getting rid of any regulations but simply means not proceeding with 68 draft laws of 183 in the pipeline.

Sadly, this does not include the "frogs' legs regulations" which are already passed, but Presidente Barroso still feels that: "This initiative shows that the Commission is firmly committed to producing better legislation… We have looked at everything on the table," he says, "and cleared away what we don't need and what the Council and Parliament were never going to agree to."

However, vice-president Günter Verheugen wants to go further. "This is just the beginning. We want to tackle red-tape and over-regulation on all fronts," he adds. "EU regulation makes sense where it adds value – but where it doesn't, we'll scrap it."

That was enough for The Independent to headline this morning that: "EU announces a 'bonfire of the red tape'", not revealing whether the bonfire actually contravenes the EU's own emission controls and whether financial provision has been made for the carbon credits needed under the emission trading scheme.

The Telegraph, however, wants "Bigger bonfires, please", and hang the cost, noting that the EU's mighty legal edifice, known fondly to all as the acquis communautaire, will be a harder nut to crack. Each law, it says, has to be unpicked one at a time. On some, a single country out of 25 can veto repeal. On others, the EU can be held to ransom by a blocking minority of states and there always seems to be one of those in Brussels whenever vested interests are at stake.

Mr Barroso's grand ambition, it adds, "is to slash and burn the acquis down to 50,000 pages." "Don't hold your breath," it tells us. And get that form filled in.