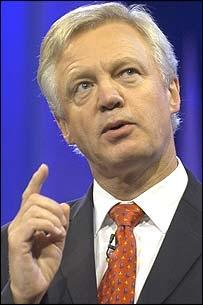 I wish it was otherwise, but the latest speech by David Davis, trailed by The Daily Telegraph this morning, simply does not cut the mustard.

Headed "Britain's place in the world", his recipe for an "open Europe" was prefaced by a declaration of "the need to reshape our policy towards the European Union." What is required, he said, thus fulfilling the promise, "is a new model for Europe, which will also allow Britain to promote its own national interest."

Observing that this was "not on offer from the present government", he tells us that the "Conservative vision, to which I hold" is of a profoundly different kind of Europe. It consists, says Davis, "of free co-operation between independent European nations, collaborating where that makes sense, imposing their own priorities where universal agreement is impossible - within the framework of a lightly regulated Single Market to which all must subscribe." He continues:

…much of what the EU does today is not part of the "core business" of the Single Market, and there is no good reason why it should be compulsory for all members to take part in every EU initiative. The seeds of the approach are already there. Not all are within the Euro. Not every country participates in the Schengen agreement on movement across frontiers.

But, the man says, "we should go further". We need to create a structure in which it is possible for member states to choose to take back powers to their own countries. And this, he tells us: "is a radical vision". But it is "the only option that reconciles today's competing views. It recognises differences, it respects national feeling, and it ends the wrangling of competing ideologies for control of the EU."

He suggests it is "the only realistic way forward". This is because it is based on a clear quid pro quo: the return of certain powers to Westminster in exchange for the right of other states and groups of states to integrate further on the terms they wish. He adds:

At the last election, we Conservatives said that we would re-negotiate, for example, the arrangements which currently apply to fishing, overseas aid and asylum, and that we would restore our opt-out from the Social Chapter. The vision I have suggested would make the return of these and other powers possible. It is the only way to create that Open Europe which we want to see.

One really does hate to be disparaging, but I think we are a little tired of "visions". What we really want is clear, unequivocal undertakings as to how those "visions" might be achieved. It is here that Davis fails.

He must know that the return of "certain powers" to Westminster breaches the fundamental principle of the Community, the irreversibility of the acquis communautaire. The only way this can be changed is through a treaty revision, which requires the calling of an intergovernmental conference (IGC) and unanimous agreement of all 25 member state governments, followed by unanimous ratification of all those states, some of which have constitutions that require referendums.

Three hurdles thus obstruct Mr Davis's "vision" – calling an IGC, which requires a majority vote, and the unanimous assent to and ratification of a new treaty. Assuming an IGC is called, it takes only one member state to block the process.

Thus, for the "vision" to have any substance at all, Mr Davis must set out what he would do if one or more of the colleagues says "no". Would he, as John Redwood once said, then have an "interesting discussion" or would he reassert the supremacy of the British Parliament and unilaterally abrogate some parts of the treaty, even at the risk of precipitating the withdrawal of the UK from the EU?

Unless or until Mr Davis is prepared to address that question, and offer clear answers to it, anything he says is pure wiffle. We have heard it all before, from any number of Tory politicians and is "vision" is as meaningless coming from his lips and it has been from theirs. And, if he thinks that speech will reassure anyone of his "Eurosceptic credentials", he is sadly mistaken.