The series of "Booker is wrong" letters to the Sunday Telegraph, attempting to rebut his pieces on the Europeanisation of the UK armed forces, continues apace. This week, we have Andrew Simpson of Bath, who offers what must qualify as the most bizarre contribution to date. 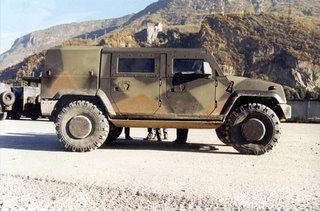 Under the heading, "I helped pick the Panther", Simpson reveals that he was formerly the MoD desk officer who initiated the Future Command and Liaison programme, which resulted in the procurement of the Panther vehicle (illustrated right), but he also tells us he is currently a consultant to Iveco – the builders of the vehicle.

Mr Simpson now feels so strongly about his employer's product, that he writes to tell us that he "cannot allow the gross errors of fact in Christopher Booker's article on defence procurement to go unchallenged." He is, he tells us, "the only person to have been intimately involved in this programme from initiation to contract award."

With such splendid qualifications, Simpson then takes Booker to task for referring to his employer's product as being "obsolescent". "Nothing could be further from the truth," he asserts. "Development of the base vehicle was started by Iveco as recently as 1999. It is as close to a state-of-the-art vehicle as is currently available, featuring a highly innovative protection system." Before dwelling on this specific point, it is as well to acquaint ourselves with what this "state-of-the art" Panther is replacing.

Firstly, it will take over close combat reconnaissance from the Combat Reconnaissance Vehicle (Tracked) (CVR(T)) series, better known as the Scorpion/Sabre series (illustrated left), vehicles which have done good service but are now urgently in need of replacement.

But, it is also being supplied to combat engineers, as their reconnaisssance and liaison vehicle, replacing the venerable but perfectly servicable FV 432, an example of which can be seen on the left. From the illustration can be seen the kind of kit that engineers carry into battle, and this is – theoretically – a ten-man vehicle.

The "state-of-the-art" Panther is, at best a five-seater and, in order to fit the radio, one or two seats have to be removed. Thus, it comes as no surprise that the Panther is already believed to be suffering from space constraints and the Engineers are rumoured to want a trailer.

None of this, of course, is mentioned by Simpson, who focuses on Booker's reference to the US up-armoured Humvee, which could have been bought for £100,000 as against Simpson's employer’s £413,000 Panther. "Humvee-based designs were considered and rejected by the MoD because that vehicle lacks the necessary protection and reliability for the role," writes Simpson. "Indeed, the Humvee itself is widely recognised as being obsolescent.” 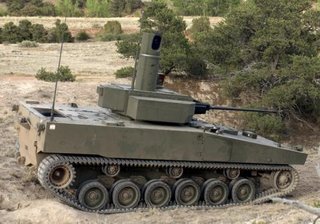 Needless to say, Simpson misses the point. It is not so much the design of the Humvee or even the Panther which is obsolescent. It is the concept – the idea of having a general purpose vehicle to carry out a wide range of different tasks. We already showed you one possible alternative to the Humvee, the M1117 Guardian - which even at twice the price slated is still cheaper than the Panther. But the proposed replacement for the CVR(T) series should actually look something like the Sika Combat Vehicle (pictured above).

This is the fruit of the US Future Scout and Cavalry System (FSCS)/UK Tactical Reconnaissance Armoured Combat Equipment Requirement (TRACER) programme - a joint US-UK venture, originated in 1996, with an in-service date of 2007.

In February 2000, however, the project was cancelled when the US Congress shifted funding from the FSCS to a more ambitious, all-embracing concept known as the Future Combat System (FCS). The British government could have continued with the project but chose not to, writing off an expenditure of £131 million. So, while the US continued its development, the MoD issued a specification which led to its purchase of the Panther.

Interestingly, when the MoD came to shortlist the contenders for the contract, the Pather was not included in the selection. The Iveco vehicle was only entered after the short-list had been announced, at the insistence of the MoD, which then went on to select it as the winner, despite cheaper and probably better contenders, not least the South-African-built RG31, used by the US forces and £124,000 cheaper than the Panther.

Whichever way you look at it, the Army has been short-changed, and so has the taxpayer. Still, there is always a silver lining – at least Mr Simpson has got a nice little earner with the winner of the contract he helped to award.