It's time to get nasty 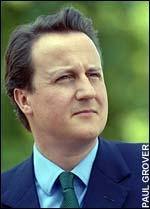 Thank goodness, at last, the Conservative leadership contest is beginning to develop a bit of life, with the Telegraph headline today announcing: "Mudslinging starts as Cameron turns on leadership rivals".

This was David Cameron depicting his two main rivals as potentially disastrous choices for the party which, in the opinion of the Telegraph was a sign of the Tory leadership contest turning "nasty". Others, of course, might see it differently, with Cameron spurning the "nicey-nicey" unreality of the contest so far and breaking out into the real world.

Anyhow, he predicted "national suicide" if Conservatives were to adopt the attitude to Europe taken by Kenneth Clarke and also suggested that the party would "sleepwalk to another defeat" under the leadership of Davis.

Says the Telegraph, Cameron's comments were interpreted by some Tories as a sign of desperation from a candidate whose campaign is generally thought to have been faltering but the paper also thinks that in a contest that until now has been almost devoid of "mudslinging", the interview could pave the way for more negative campaigning.

In its own editorial, however, the paper takes the candidates to task for their failure to provide an alternative to the government's European agenda:

Their policy - the "repatriation" of fishing and overseas aid - is not only pathetically limited in its ambition, but actually impossible to deliver unless the party is prepared to consider the ultimate sanction in any negotiation: walking away. This is not something any of the current leadership contenders have had the courage to admit.

Reflecting precisely the sentiment of this Blog, the editorial then goes on to say that the forthcoming Conservative conference "would be depressing if delegates were to be offered more empty rhetoric about repatriation and renegotiation."

Instead, the candidates should be setting out a confident vision of how, exactly, they would achieve the restoration of sovereignty. No one wants a return to the savage internal Euro-squabbles of the 1990s, but the party's interests - let alone the country's - are not served by fudging the issue.

And there's the rub. As long as the candidates pussy foot around the issues, being ever so nice to each other, no one is being offered a real choice. It seems that Theresa May casts a long shadow but she now needs to be kicked into touch. It's time to get nasty.