Matters of no importance to the British media

Our readers will remember all the endless horror pictures from Louisiana and New Orleans and the shrieks emanating from the entire British media (not just the BBC) about the terrible lack of preparedness in the world's richest country; Bush's inadequacy; the horrors of racism and poverty in the United States.

Strangely enough, there was far less news from Mississippi, also a southern state, also with a large black population (not all of them poor) and also badly hit by Katrina. But then, of course, Governor Hailey Barbour (Republican) very quickly brought matters under control there, while Governor Blanco of Louisiana (Democrat) has spent her time weeping on camera and admitting that she had no clue what day of the week she said anything. But hey, that is all Bush’s fault.

Now we have Rita storming its way towards Texas and a fairly well organized exodus from Galveston and other places. Do we get front-page headlines and pictures in the British papers? Not on your life. News that shows American ability to organize is not news. News that shows how much depends on state rather than federal arrangements is definitely not news.

The Daily Telegraph who did so much gloating about Blair attacking the BBC but who had been extraordinarily nasty and ignorant about the problems around Katrina (remember all those deeply unfunny Garland cartoons?) has a very pretty picture of the hurricane on its front page. Only when you get to page 14 do you get anything about Texas at all, with the leading piece headed This Time the White House Will be Prepared.

Only on page 15 is there a rather inadequate account of what is going on and what has been organized. Other newspapers do no better.

Never mind, Glenn Reynolds reports on Instapundit that, thanks to media hysteria over Katrina, there have been some problems with the Texas evacuations. I expect big headlines about that tomorrow.

In the meantime, we have had news about Rita: up to 24 people have been killed as a bus burst into flames. Yippee!!!

What else has the British media not found interesting (or less interesting than Kate Moss or Charles Kennedy)? Well, there is the appointment of the new Chief Justice of the Supreme Court, allegedly a fillip for Bush in his “beleaguered” presidency. It was also, apparently, according to our hacks, a surprisingly easy appointment as they had expected a big fight. Well, they were wrong. What else are they wrong on?

While there has been a great deal of interest in John Roberts’s views on abortion (something of an obsession with the American liberals and, therefore, the British media when it bothers to write about American affairs) little has been said of one interesting aspect of the Roberts hearings.

This is what the Wall Street Journal Europe wrote in its editorial on September 20 [subscription only]:

“Perhaps the most encouraging exchange of the week was Judge Roberts’s reply to GOP Senator Jon Kyl on the growing trend in U.S. courts to cite foreign precedents to justify their decisions. ‘Domestic precedent can confine and shape the discretion of the judges,’ Judge Roberts said. ‘Foreign laws, you can find anything you want. If you don’t find it in the decisions of France or Italy, it’s in the decisions of Somalia or Japan or Indonesia, or whatever.’ Justices Stephen Breyer and Anthony Kennedy have been especially aggressive in pushing this foreign legal buffet line on the High Court. But we’re glad to say it doesn’t sound as if the new Chief will be joining them.”

Needless to say, this blog is very glad about that, too, and wishes that some of our own judges would start thinking more seriously about the need for rigour in legal precedence.

So, no good news from the United States. What about other countries? 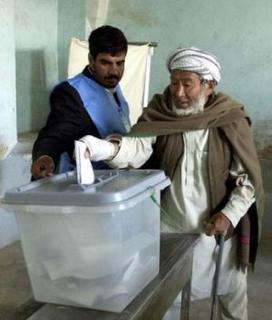 How much reporting did we get about the successful elections in Afghanistan, despite the presence of British troops and monitors? Very little. Far more had been written before while the remnants of the Taliban and various Al-Qaeda groups did their best to disrupt by threatening, exploding bombs and killing candidates and officials.

Despite all the above, well over half the population of the country voted, proudly displaying their inky fingers as the people of Iraq did before them.

Many thousands of women voted and several hundred candidates stood successfully, in the sense that they campaigned, survived and have garnered some votes. If Ms Alibhai-Brown in the Guardian or former Vogue editor turned columnist Ms Vicky Woods in the Daily Telegraph wrote about this, I must have missed it.

Then there is the North Korean agreement. We have had a certain amount about what might turn out to be one of the most important developments in international relations (or it might not) but one and all, our hacks and hackettes presented it as a climb-down for the United States. Tee-hee, Bush is bested again.

Really? Nothing about the fact, that unlike Iran, still mollycoddled by Britain, France and Germany, North Korea appears to be ready to do a deal? What about the fact that after years of procrastination, China has fallen into line and joined the United States, Russia, Japan and South Korea to put pressure on its client state.

Of course, the agreement that requires North Korea to drop all nuclear developments (including those that it denies having) before it gets any aid from the United States may not work but, equally, it may. By no stretch of the imagination it is a defeat for Bush. 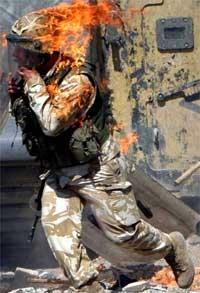 The American Steven Vincent was kidnapped and murdered after publishing an article that described the way the Shi’ite militias under the benign gaze of the British authorities were infiltrating the police in Basra as well as establishing something akin to lynch law. As our readers will remember, when asked about this, the British military told Mr Vincent that it was “not their job, mate”. And as our readers will also remember, this blog suggested that Basra was trouble waiting to happen and it might be a good idea if the main stream media woke up to the fact.

Well, it did not wake up. It did not even mention that another journalist was kidnapped and murdered in Basra. All over the world the case Fakher Haider, who wrote for the New York Times was reported. In Britain the Guardian mentioned it because Mr Haider had written for them as well, and even it refused to go into too many details.

The New York Times and the International Herald Tribune reported on Monday, September 19:

Shortly after midnight, two cars,one of them a sedan and one a police car, parked outside Haider's apartment building, said witnesses at the scene, who said they could not be identified without jeopardizing their lives.

The gunmen took Haider's phones,his pistol and some videotapes, Hamza said. As they prepared to leave, they told her they were only going to interrogate him for a few hours and bring him back.

Haider told his wife not to worry and then quickly wrote down the phone number of a friend and fellow journalist, telling her to tell the friend to call the Basra's governor's office. The gunmen were standing by at the time, Hamza said.

In recent months, Haider had confided to friends that he was worried about the increasingly violent atmosphere in Basra. In July, gunmen in a pickup truck chased his car and fired at him, and he narrowly escaped after driving off the road and firing his pistol into the air, he told a friend, who asked not to be identified.”

On the same Monday we had the reports of the still not fully explained prison raid (or possibly not), the attacks on the British troops and the apparent readiness of the Basra police to work together with the terrorists (called, for some reason, insurrectionists).

As the British media had not followed the story and the journalists know nothing about the situation in Basra, all we have had is hysterical outbursts about Iraq collapsing into civil war (as it has been predicted fruitlessly for years) and whether this means that the whole American fight for democracy and against terrorism is in shambles.

But then, the British MSM hacks do not read blogs. Otherwise they might know a bit more about good news coming from Iraq and Afghanistan.

In the rest of Iraq terrorists (insurrectionists to the hacks) are handed over to the Iraqi police and coalition forces by the local population – in Basra the local population is terrified of going to the police as they know that the force is in cahoots with the Shi’ite militias.

In the rest of Iraq the coalition forces talk of strengthening democracy – in Basra, the British authorities shrug their shoulders and refuse to worry about the place turning into an “Islamic Republic”. The British ambassador in Baghdad expressed the, presumably, accepted FCO view that Britain had no problems with Iraq becoming a theocracy. And if that cannot be achieved, the FCO, one assumes, will settle for Basra being one.

Is this not something our journalists should investigate instead of screeching about “dumb Yanks” getting it wrong?

We, on this blog, certainly intend to report on the situation. Alas, we cannot get accreditation to Basra or question the British military authorities. But we can read the reports on the blogs and by journalists who are actually there. And, at least, we and our readers know what is going on in various parts of the world.