A small but important gesture 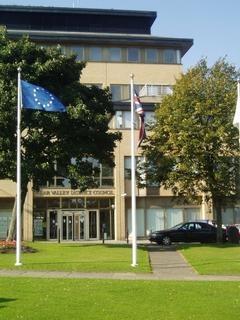 The Northern Echo obviously had fun with Wear Valley District Council and its "illegal" EU flag outside its Crook Civic Centre base in County Durham.

After the council had been displaying the flag for several years, local crusader Jim Tague made a request under the Freedom of Information Act as to whether the council had the correct permission. When it transpired that it did not, the council replaced it with a St George's cross.

But, what is particularly chilling about the issue is the response of the Wear Valley spokesman, who told the paper: "We are looking to get it put back up again - with the appropriate permission." In other words, the officials never give up.

However, as Neil Herron points out, the European Union is a political project, so a local authority which flies the EU flag could be in breach of Section 19 of the Local Authority Guidelines on Publicity... i.e., you cannot use public money to attempt to persuade the public to hold a particular view on a political matter. So, he writes, a local authority flying an EU flag must be asked politely to remove it.

We await to see whether more campaigners throughout the country move in on errant councils and, while they are about it, take on the many hotels who seem to think it is a good idea to fly the EU flag. See this forum post for more detail.

Next target, this Blog understands, is that affront to our national identity, the "European Community model" driving license, adorned with the offending symbol, intentionally used reinforce the sense of "European identity" or, as one EU commissioner put it, to provide "another piece of Europe in your pocket".

Shortly, we hope to have details on the availability of a source of Union Jack stickers, of a size to conceal the symbol and assert our own national identity. Affixing it will be a small but powerful gesture of defiance, a way of showing our rulers that we do not accept their distorted values.

And, small though it might be, it is not that small. After all, if the symbolism of the flag was not so powerful, why does the EU invest so much time and effort in promoting it?