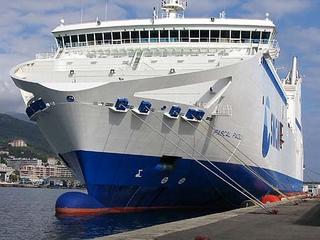 This time it is not some former French colony that is being favoured by the French commandos but a ship off Corsica that had been “hi-jacked” by the local unions.

Trouble started on Monday when news went round Marseille that the National Corsica Mediterranean Company, owner of Pascal Paoli, was going to be privatized. Up with this the Corsican unions would not put and they went on strike and, as befits French or Corsican strikers started rioting.

That was sorted out with the help of tear-gas and truncheons but about thirty masked but unarmed strikers seized the Pascal Paoli and took it off to the Corsican port of Bastia. This morning fifty commandos, in their regulation black outfits, abseiled from helicopters and took the ship over in 10 minutes, taking it back to Marseille.

Interior Minister Nicolas Sarkozy professed himself to be pleased by the speed and efficiency of the operation.

Would it have happened so smoothly with Euro-commandos? (above)