Changed for the worse 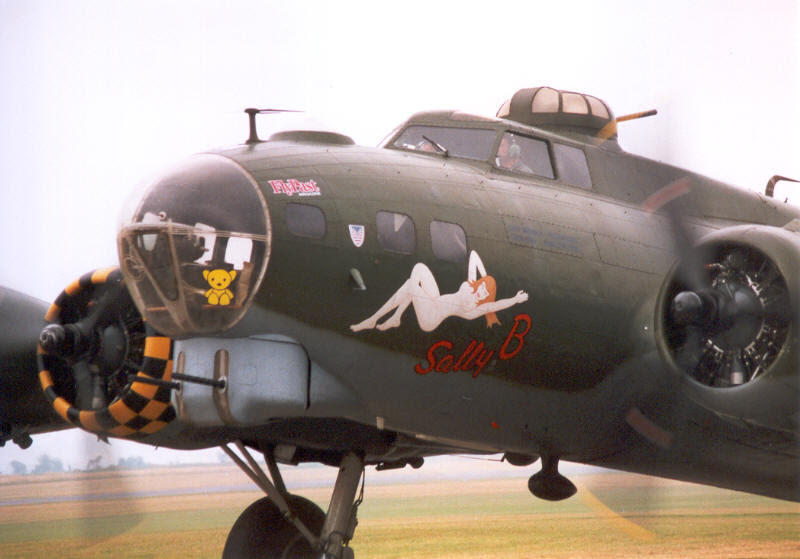 Unusually, yesterday, I abandoned the Blog to travel down with my son to Duxford for the final airshow of the season, not least to see Sally B (pictured left) fly. This aircraft, the last remaining airworthy B-17 Flying Fortress on the UK register, has recently been in the news after a particularly inane EU law on aviation insurance grounded her.

The precise problem was (and still is) EC regulation 785/2004, under which the B-17 must now be classified for insurance purposes alongside commercial airliners, prohibitively raising its premiums to the equivalent of £1,000 for each hour of flying time. However, due to the intervention of some wellwishers and a bit of creative accounting, the operators managed to salvage something of the 2005 flying season, although the problem is by no means over, and the 2006 and further seasons remain in doubt.

As it happens, the Sally B did not fly yesterday. Having escaped, temporarily, the clutches of the EU, she – with the rest of the flying programme – was caught in the grip of ghastly weather which hovered around the airfield all day, with the cloud base at 400 feet and visibility down to a mile at times. Apart from a spirited display by a Chinook, and a vain attempt by a Chipmunk (the aeroplane variety) to cheer us up, there was no flying.

However, that did give us plenty of time to visit the huge Sally B tent, to the edge of which was a small table with a petition calling on the government to negotiate an exemption to the directive. However, the table was unmanned and none of the staff there seemed interested in gathering signatures, very much reflecting the attitude of the Sally B operators, who seem anxious to downplay the political aspects of this problem.

Instead, the emphasis was very much on fund-raising and it is very clear that the operators’ game is to increase the flow of funding in order to buy their way out of the problem, rather than confront the issue head on.

The greater problem is that Sally B is not on its own. The commentator, over the Tannoy, also prattled on for a while about the spiralling costs of insuring display aircraft, although, in a long dissertation, not once did he mention the EU. We mustn’t be "political" must we?

But the shadow of the EU now permeates the whole airshow. The great thing about Duxford always used to be that it was an enthusiasts show. People by the thousands came from all over the country came to see aeroplanes, in the static park and flying. And while other airshows throughout the country were becoming progressively infested with funfairs, bouncy castles, trade stalls and hamburger vans, at Duxford you still got what you paid for – pure, raw aviation.

However, this time – in an attempt to cover those spiralling costs – the bouncy castles had arrived. While the hangers used to be emptied of their exhibits and given an airing out on the tarmac, where we could see them in their glory, the aircraft are now swept aside to make room for the stalls, the funfair and all the other garbage. The character has gone. All we are left with is another "family entertainment" venue, with the majority of the crowd entirely uninterested in the flying.

On the other hand, what once used to be an uncluttered flight line is now obscured by corporate hospitality tents, and special seating enclosures for those who are prepared to pay an extra fee on top of the £23 entrance ticket. The great unwashed, who actually came to see the aircraft, are now confined to a smaller and smaller section of the airfield, where we are all squashed together so tight that it is hard to see anything of the display.

After 15 years without a break of going to Duxford airshows, I will not be going again. In the pursuit of greater revenue, the shows have been terminally "dumbed down". Doubtless, the EU is not wholly to blame, but it has played its part, and another treasured part of life (my life, certainly) has been changed for the worse.