Counting their own teeth 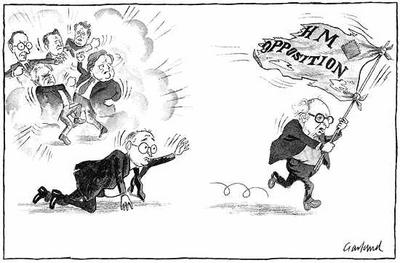 Just for once, The Daily Telegraph leader hits the spot - sort of - as does the Garland cartoon – despite him being one of our least favourite cartoonists.

The leader takes to task Mr Blair and the "defensiveness" of his apology to Walter Wolfgang, the elderly Labour activist who had the temerity to voice what most delegates kept to themselves in Brighton this week about the Iraq war.

But the real scandal of the Wolfgang affair, says The Telegraph, was not that he was frog-marched from the conference floor, but that when he tried to get back in, he was detained briefly by the police under anti-terrorism legislation. "Surely there could be no more vivid illustration of how Labour has wrecked the historic balance between freedom and security than in an 82-year-old Jewish refugee from Germany being detained under terrorism legislation for no graver offence than having noisily accused a politician of lying," says the paper.

Actually, it illustrates just as clearly how the now contemptible Mr Plod has lost the plot, but we shall let that pass.

The substantive point, from the perspective of this Blog is the Telegraph assertion that Blair ties himself up in knots “because he does not understand the simple notion of a liberal society, based on principles of the rule of law and of limited government.”

“He must always tinker and control because - as a life-long politician with scant experience outside of that bubble - he cannot understand the simple human desire to be left alone.”

"Other politicians," the paper concludes, "should learn from this. If the Conservatives fail in Blackpool next week to take on the baton from Mr Wolfgang and hold the Government to account, they will no longer be worthy of being regarded as an Opposition."

Looking at the effluvia emanating from one of the leadership candidates – the youthful Etonian Mr Cameron – one can only admire the skill with which his campaign team managed to put together a "manifesto"” so utterly devoid of content. It is so much a parody of itself that it is beyond parody, even on this Blog.

"We need bold, confident and consistent leadership – leadership that recognises we must change to win,” proclaims the Cameron. And on Europe? "Now is the time to fight for an open and flexible Europe…".

Therein lies much of the problem, so amply illustrated by the Garland cartoon. For want of words which can properly describe just how utterly useless these people are, one can only suggest that they are so far up their own backsides that they only thing they're any good for is counting their own teeth.