The sleep of the damned 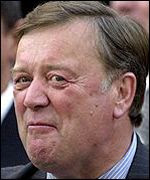 The most worrying aspect of the YouGov poll published in today’s Daily Telegraph is not so much the news that Ken Clarke has crept ahead in the Tory leadership race, preferred by 33 percent of the rank-and-file as opposed to 28 percent who prefer Davis. That much would be expected after Clarke’s high profile launch last week, with Davis presumably keeping his powder dry.

No, what is worrying is the response to the question on whether "Europe" should be an issue in the leadership election, phrased in somewhat laborious terms as follows:

To that question, 42 percent felt that the EU should be a major issue but the majority felt otherwise, at 56 percent, with only two percent "don't knows".

This would appear to endorse the prevailing view amongst the Tory hierarchy that “Europe” should be off the agenda, leaving the field clear for bickering about schools‘n’hospitals, and will undoubtedly be taken as a welcome sign by the leadership candidates that they can ignore the vexed question of the European Union.

One could, of course, take the question apart as being hopeless anodyne, inviting the majority response it did. Couched in different terms, it might have elicited a different response. It could, for instance, have been phrased thus:

Despite the "no" votes in the Dutch and French referendums, the EU constitution is still being implemented piecemeal, the rate of political integration is continuing unchecked, more than 60 percent of our laws are still made in Brussels, the number of laws from that source increases daily and the powers of Parliament and the British government are steadily diminishing. Do you think that the power of the European Union should be a major issue in the leadership election?

Arguably, the response might have been considerably different, but such a question was never going to asked. In its original form, the question fairly represents the general perception of the population, a feeling that, after the Dutch and French referendums "Europe" is somehow no longer an issue – a feeling reinforced by the relative lack of activity of the "colleagues" as they enjoyed their long summer holiday.

This is compounded by the reluctance of any of the candidates to bring the EU issue to the fore. To a man, they are refusing to offer any clear direction by way of a European policy, or provide a clear plan of action to claw back powers from the monster. In this, they are aided and abetted by the media, which are obsessed by their celebrity culture and "Bush-bashing".

We have seen this for ourselves on this Blog, with the hit rate peaking about the time of the referendums, only to slide back down and settle at half the rate of the peak readership, now growing only sluggishly. Despite all that is happening on the EU front, people are less interested in what is going on, and are content to attend to their own affairs.

So be it. It was Thomas Jefferson who told us that: "The price of freedom is eternal vigilance." I don't know who said "we get the government deserve", but the price of going to sleep is further European integration. To the people out there, those who believe that "Europe" should not be an issue in the Tory leadership election, all I can say is "Enjoy your sleep". But it is the sleep of the damned.